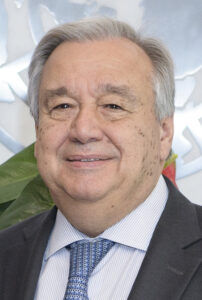 “As the world battles historic droughts, landscape-altering wildfires and deadly floods, a landmark report from global scientists says the window is rapidly closing to cut our reliance on fossil fuels and avoid catastrophic changes that would transform life as we know it….

“Only by making deep cuts to greenhouse gas emissions, while also removing carbon dioxide from the atmosphere, can we halt the precipitous trend.” — “Earth is warming faster than previously thought, scientists say, and the window is closing to avoid catastrophic outcomes,” CNN.com (8-9-21)

“The UN Secretary-General António Guterres said the Working Group’s report was nothing less than ‘a code red for humanity. The alarm bells are deafening, and the evidence is irrefutable: greenhouse gas emissions from fossil fuel burning and deforestation are choking our planet and putting billions of people at immediate risk. Global heating is affecting every region on Earth, with many of the changes becoming irreversible.’” —  “Secretary-General’s statement on the IPCC Working Group 1 Report on the Physical Science Basis of the Sixth Assessment,” www.UN.org, August 9, 2021

Note:  Guterres is a member of the Portuguese Socialist Party and former president of  the Socialist International.

“We can’t solve the climate crisis without getting out of our cars and onto buses and trains.” — Opinion, MarketWatch.com (updated August 10, 2021).

It’s About Power
Seven years after its last report, the UN’s Intergovernmental Panel on Climate Change (IPCC) released a new report in early August.  As usual, it was alarmist and postured as reflecting scientific consensus.  Naturally, the Establishment media quickly echoed the alarm.

However, the UN’s game plan is clear, once one understands the forces that created and control the UN and also control the environmental revolutionary movement.   The objective of those forces is to control us by creating pretexts for unaccountable government power, and those forces use revolutionaries to create pressure from below to justify their power grabs.

The UN’s game plan is not new.  It was clearly revealed at the 1992 UN Earth Summit in Rio de Janeiro.  After attending the event and witnessing the political realities,  Dr. Dixy Lee Ray wrote an authoritative expose, Environmental Overkill — Whatever Happened to Common Sense?  Dr. Ray was the former governor of the state of Washington and chairman of the Atomic Energy Commission.

On page 10, Dr. Ray summarized:  “The objective, clearly enunciated by the leaders of UNCED [UN Conference on Environment and Development — the Earth Summit], is to bring about a change in the present system of nations. The future is to be world government, with central planning by the UN. Fear of environmental crises, whether real or not, is expected to lead to compliance.”

Revolutionaries need crises to propel those power grabs.  The climate change crisis hype serves the same purpose as the government’s use of a COVID pandemic — to expand the power of government.   The climate change “crisis,” in particular, is designed to limit our access to energy by forcing reliance on expensive and inadequate alternative energy sources, leading to government managed rationing.

Cloaked as “Science”
To support its wild claims, the IPCC makes use of computer climate models, which are designed to be alarmist.  The IPCC’s climate models are notoriously deficient in predicting reality.

To achieve credibility for its forecast, the UN touts the fact that representatives of 195 member countries have signed off on the report.  But this just shows the IPCC’s desperation, since the unanimous consensus of corrupted member governments does not reflect either overwhelming scientific agreement or truth.

Indeed, many competent, uncorrupted scientists dispute the thesis that manmade CO2 is responsible for global warming. One such is Dr. Richard S. Lindzen, Professor Emeritus, Department of Earth, Atmospheric and Planetary Sciences at the Massachusetts Institute of Technology, now retired.  In June of last year, he wrote:

Climate science didn’t used to be alarmist prior to the late 1980s.  That changed during the years 1988-1994, when climate research centered on CO2 and global warming received a 15-fold increase in funding in the US alone. Suddenly there was a great financial incentive to propel alarming global warming scenarios.1  (See also his comments in our 2018 post “UN Climate-Change Hysteria.”)

Another noteworthy dissenter was the late great Princeton physicist Freeman Dyson.  Dyson performed pioneering work in areas such as quantum field theory and astrophysics.   In 2018, Dyson argued: “If they did not scare the public they wouldn’t get support from the government.” 2

In response to the widespread hype that the science was settled, and efforts to demonize dissenters, the Global Warming Petition Project was created in 1998 (following the Kyoto treaty).   The Project shows that many scientists rejected the UN enforced orthodoxy.  The petition states in part:

There is no convincing scientific evidence that human release of carbon dioxide, methane, or other greenhouse gases is causing or will, in the foreseeable future, cause catastrophic heating of the Earth’s atmosphere and disruption of the Earth’s climate. Moreover, there is substantial scientific evidence that increases in atmospheric carbon dioxide produce many beneficial effects upon the natural plant and animal environments of the Earth.

The petition was introduced with a letter form Physicist Frederick Seitz, former President of the U.S. Academy of Sciences.  In response, the petition was signed by over 30,000 Americans with university degrees in science including 9,000 with PhDs. Just one of many notable signers:  the late Dr. Edward Teller, known colloquially as “the father of the hydrogen bomb.”

Of course, if the media mentions such dissent at all, it demonizes the dissent out of hand.

The climate change scare serves several totalitarian objectives.  The scarcity and rationing objective was cited above.  But another one that has emerged is the result of the government’s highly successful regimentation of society using the COVID scare.  Climate activists are jealous of that success.  For example, former Secretary of State John Kerry suggested:  “You could just as easily replace the words climate change with COVID-19; it is truly the tale of two pandemics deferred, denied, and distorted, one with catastrophic consequences, the other with even greater risk if we don’t reverse course.” 3 Kerry is now the 1st United States Special Presidential Envoy for Climate in the Biden administration.

One response to “The UN’s IPCC Climate Fraud”