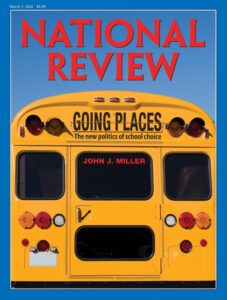 Why would the United States give the Communist China most-favored-nation status in 2000? “The Two-World Anti-China Strategy,” an article in the March 7, 2022, edition of National Review, suggests an answer that could have been taken straight from Foreign Affairs, the Council on Foreign Relations flagship publication. Foreign Affairs is even quoted as an authority by the article’s author Hal Brands, who is the Henry A. Kissinger Distinguished Professor of Global Affairs at Johns Hopkins University. Such outright deference is not surprising, since National Review’s claim to be a conservative publication has been clearly bogus for decades.

“The Two-World” article assumes that the reasonable world is united in the goal of global government but consoles the reader that a two-world order is an acceptable substitute. The reality is that they are one and the same!

George Orwell’s 1984 provides a useful analogy. In 1984, the world is divided into three regions, two of which are always combined to war against the third. Since there are always two sides in the conflict, the regions are essentially in a two-world order. However, because the regions are all ruled under varying labels of Marxist tyranny, the outcome of the war would be politically inconsequential. Why, then, do those in control find a constant state of warfare to be beneficial? Because being at war creates the exigency for citizens to fight to keep their regime in power. It also keeps the people preoccupied in such a way that they scarcely notice the economic bondage that they are being placed in as the nation’s wealth is squandered on a fruitless war effort. The warring, three-region structure isn’t an alternative to global government; it IS the global government.  While we are not currently at war, the threat of Chinese aggression pressures the world to regionalize in order to effectively keep “peace.”

The National Review article excuses Washington’s showering of American investment, trade, technology, knowledge, and skills on China as an attempt to “tame” it. But Communist China is entirely a creation of the Insiders. Under their direction, American resources delivered China into the hands of Mao Tse-tung (see Masters of Deception by Vance Smith and Tom Gow) and have continuously propped up the failing Communist system that ensued. Now, the above measures to “tame” China have elevated it to a believable enemy creating a pretext to draw the US into tight consolidation with the rest of the world. As with every crisis created by the Insiders, the proposed solution is that “The United States needs to compete more effectively for influence in…(global) organizations…”

Entangling the US with the rest of the world in regional government, such as the EU or USMCA potential, on the road to world government, provides the opportunity for a Marxist majority to overrule our free-enterprise, Constitutional system of government. Referring to the Cold War, which was similarly created by the Insiders, the National Review article insists:

“Then as now, containing hostile regimes required working with some unsavory characters. But highlighting the clash between liberal values and China’s profoundly illiberal autocracy is critical to rallying the democratic world — not just those countries directly threatened by Beijing’s military power — against its expanding influence.” [Emphasis added.]

It doesn’t take a crystal ball to predict that we can expect plenty more “news” about the Chinese threat aimed at “rallying” the world.  Additionally, we can expect to unite with and give aid, technology, and resources to “some unsavory characters” in the “concerted resistance” who can become the next “war for peace” enemy when China is subdued.  The article even suggests that we “forg(e) tech coalitions through which groups of democracies cooperate — for example, by sharing data or pooling research-and-development money.” In politics, “unsavory characters” are totalitarian dictators, and what kind of data would we share with them? Data on our own people? So they can be more easily subjugated?

The main conclusion of the article is summed up in this quote,

‘“Globalization was not global,” Stephen Brooks and William Wohlforth wrote in the journal International Security over 20 years ago; “it took sides in the Cold War.” Likewise, a two-worlds strategy today recognizes that globalization must occur primarily within geopolitical dividing lines rather than across them.”’

George Orwell, International Security, National Review, and Cold War history all indicate that the Two-World Strategy is the path that the New World Order will take. As in 1984, the geopolitical dividing lines will be separating regions that are each Marxist tyrannies, their political systems different in name only. And the entire world will be controlled by those who create the next ostensible aggressor. It’s false conservative leadership like that offered in National Review that will neutralize any resistance to the plan for a New World Order and even guide those who should be fighting it to instead embrace it. Freedom First Society offers the truth and the real solutions to world problems: Get the US out of entangling alliances, stop our officials from propping up Communist dictatorships through unconstitutional spending and treason, strengthen industry at home, and expose the Conspiracy that is working to lead us into world tyranny.