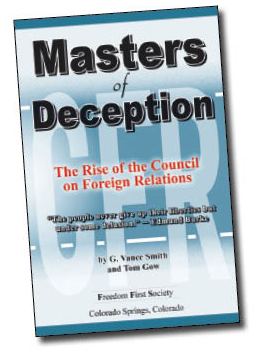 Masters of Deception: The Rise of the Council on Foreign Relations
$9.00

Why Is the American Dream Fading?

What Can You Do About It?

Read Masters of Deception and find out!

As the great British statesman Edmund Burke stated in 1784:

“The people never give up their liberties but under some delusion.”

Millions of Americans have recognized serious problems, such as:

And they naturally want to see America back on the path to decency and greatness.

But what do they get? More of the same — the opposite of what they want. Why? Because most Americans have been deceived, are being deceived, and don’t recognize the deceptions. They have ignored a fundamental principle that a good cure requires an accurate diagnosis of the disease.

Masters of Deception provides readers with enough of the important historical record sidelined by the Establishment media to make a sensible diagnosis of what is ailing us.

This is not a short read promising a quick, easy fix. Indeed, Masters of Deception is for the serious reader who would embrace the words of Patrick Henry:

“For my part, whatever anguish of spirit it might cost, I am willing to know the whole truth; to know the worst and to provide for it.”

After establishing a solid analysis of the problem as a foundation, Masters of Deception proceeds to argue for a realistic strategy for victory based on well established principles.

Order your own copy and then as one step toward a sound solution order copies for your friends at discounted rates: