All across America, public officials swear up and down that Common Core education reform has been, and will be, state-led and locally controlled. No one is telling us that in early 2012, before the general public was even aware of Common Core, elite representatives of big-money corporations and high-level members of the political elite in Washington met in a privately funded think tank where they formally declared our children to be “human capital”—and uneducated children to be a threat to national security.

The tangible product of their deliberations is a measly 121-page document titled “U.S. Education Reform and National Security.” It can be viewed at cfr.org, the official website of the Council on Foreign Relations. 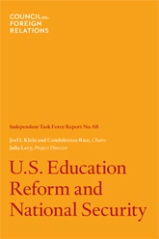 In this document, these self-appointed education gods bemoan the state of American education (presumably the result of the incompetent masses) without ever once giving consideration to the historical facts: (1) for nearly 200 years the entirely locally directed American education system was the envy of the world, and (2) as top-down federal meddling in education has increased, educational outcomes have consistently declined. If these dictocrats were sincere in their concerns, this historical evidence would demand that they put forward a very different solution from that called for in their 121-page document.

Their solution: the implementation of Common Core education and standards via a partnership between State Governors, corporations, and federal authorities; the use of federal dollars (our money) to incentivize (bribe) states into compliance with national education standards; and the oversight of local education by a broad coalition of corporate leaders, the federal Department of Education, the federal Departments of State and Defense, AND un-named federal intelligence agencies. This oversight is supposed to better prepare the human capital necessary for military service and national economic success.

How do they propose to enforce their top-down authority? Their scheme calls for intensive national evaluation (auditing) of teachers and schools. Audit focuses include: student mastery of Common Core content, mastery of “national security skills” (standards in science, technology, civics, etc.), and a vague statement about auditing the “characteristics of the school.” Where schools underperform, severe penalties are to be imposed, including the “reallocation of resources” (funding and human capital), the replacement of school leadership, and the top-down re-design or re-structuring of school systems.

While these penalties are to be imposed by State and local leaders, the audits are to be directed and published on the national level, effectively removing actual control over audits from state authorities and from the parents of the children who are affected.

I find the militaristic rhetoric of this private task force particularly alarming. Declaring education to be a national security issue (meriting oversight by intelligence agencies and the Department of Defense) lays the philosophical ground-work for a massive top-down power grab. History has shown that when education ceases to be about children and becomes an issue of national security the pretext for federal power becomes absolute. Those who resist or rebel against that power risk being labeled as enemies of the State.

Why We Should Be Concerned

Some may question why the recommendations of this private task force should concern us when they are just that — recommendations. First, this kind of high-level meddling and scheming in private forums provides no transparency to the general public. We are told only what they wish us to know. Second, those involved have clear conflicts of interest: They are the beneficiaries and Gods of the system they propose to impose on us. The power, control, and wealth, these corporacrats stand to gain — as long as Americans will meekly grovel before their statistics and criticisms for a few of our own tax dollars — are staggering.

Third, there is a consistent historical pattern over the past 100 years whereby American public policy is being shaped by corporacrats acting in collusion with high-level federal officials. The powers they seek to obtain and the process by which they are going about it are in direct violation of the Constitution of the United States, which clearly reserves both the direction of education and the establishment of public policy to the states and to elected representatives of the people respectively — not to political or corporate elitists.

What is the take-home message? While many are busy obsessing over the details and drawbacks of Common Core, most remain blind to the bigger picture of what is happening. By simple definition these elitists are imposing a form of fascism on the American people that runs entirely contrary to the form of limited constitutional government established by America’s founders.  These insiders are using propaganda and big money to manipulate the American people into accepting their policies a piece at a time, while pretending that their schemes came straight from the grass-roots all along.

This deceptive power grab, now being carried out without our general knowledge or consent is unacceptable and dangerous. Public officials who sign onto these nefarious schemes are guilty of subverting the liberty of the people.   Inasmuch as any among us support and comply with these kinds of top-down power grabs, we are facilitating the destruction of our own liberty.

One response to “School Children and National Security”