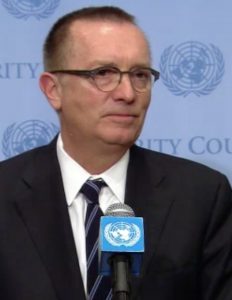 “What is the central concern driving North Korea’s quest for nuclear weapons? Pyongyang claims it is a well-founded fear that the United States and South Korea plan aggression to overthrow the Kim regime.” Alton Frye, Foreign Policy Magazine, 11-28-17

An incredible piece of subversive nonsense recently appeared in the Establishment’s Foreign Policy magazine. The above referenced article suggested that the way to persuade Kim Jong Un to halt the North Korean nuclear weapon’s program was to convince him that China was an adequate deterrent to a U.S. invasion. To do so, the article recommended the deployment of Chinese forces on North Korean territory:

“A symmetrical policy of reassurance could involve possibly 30,000 Chinese military personnel stationed there, a total comparable to U.S. forces south of the 38th parallel.

“Yes, it seems counterintuitive to encourage China to strengthen military capabilities in the north. Some may find the notion antithetical to American interests. Shoring up a state with such vicious human rights abuses is a high price to pay for security. Yet the net effect should be to reduce the actual likelihood of war.”

We would not give much attention to such immoral sophistry were it not for the status of the article’s author — Alton Frye.   Frye is not only a member of the Internationalists’ Council on Foreign Relations (CFR), since 1993 he has been a CFR director. He also served as a CFR vice president from 1987 to 1993 and then as a Senior VP until 1998.

If one knows the history of how and why the UN was founded, it is a short step to realize that the Internationalist architects of a new world order run by them need crises to overcome normal public resistance to their intended radical realignment of power.

Recall the 1962 analysis, “A World Effectively Controlled by the United Nations,” by State Department veteran and CFR member Lincoln P. Bloomfield. Bloomfield argued that accelerated world government “may be brought into existence as a result of a series of sudden, nasty, and traumatic shocks…. The transforming experience, whether evolutionary or revolutionary, must, to achieve the foundation of consensus requisite for community, be enough to reach and move great masses of people….”

“Some analysts and diplomats hope his visit could spark a U.N.-led effort to defuse tensions.”

In 1954, a year after the Korean armistice was signed, our Defense Department let it be known that that high-ranking Soviet officers had been in North Korea directing that side of the war. At the same time, the UN’s Military Staff Committee overseeing our side of the war worked under the UN undersecretary-general for political and security council affairs. This post had always been held by a communist by secret agreement at the UN’s founding. In short, Communists were working both sides of the war. And Internationalist Insiders ensured that General MacArthur was prevented from winning it.

Excerpt from Masters of Deception:

“I realized for the first time that I had actually been denied the use of my full military power to safeguard the lives of my soldiers and the safety of my army. To me, it clearly foreshadowed a future tragic situation in Korea, and left me with a sense of inexpressible shock.” 18

Foreshadowing the “rules of engagement” that strangled U.S. forces in the Viet Nam War, MacArthur was forbidden to attack Chinese supplies being amassed across the river or to follow Chinese MIGs retreating across the border into China. Although the reason given for such restrictions was ostensibly to avoid a wider war with China, the effect was just the opposite. General Lin Piao, commander of the Chinese forces, later said:

“I never would have made the attack and risked my men and my military reputation if I had not been assured that Washington would restrain General MacArthur from taking adequate retaliatory measures against my lines of supply and communication.” 19

General Mark Clark, who signed the Korean armistice agreement in July 1953,   would echo MacArthur’s criticism. In his memoirs, Clark declared it was: “beyond my comprehension that we would countenance a situation in which Chinese soldiers killed American youth in organized, formal warfare and yet we would fail to use all the power at our command to protect those Americans.” 20

While men were still dying in the UN “police action,” Adlai Stevenson (the soon-to-be Democratic nominee for president and the future U.S. ambassador to the UN under Kennedy) authored an article for the April 1952 Foreign Affairs, entitled “Korea in Perspective.” In summarizing, Stevenson stated:

“The burden of my argument, then, based on the meaning of our experience in Korea as I see it, is that we have made historic progress toward the establishment of a viable system of collective security.” 21

The cost of that “progress” was enormous in South Korean and American dead.