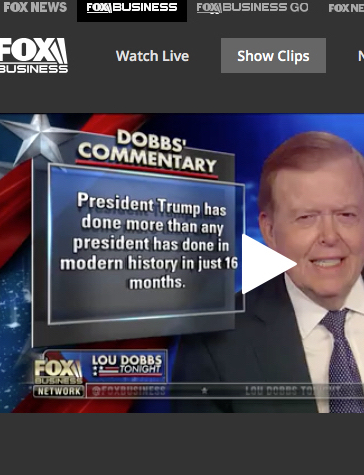 “Does it ever seem to you that President Trump has done more than any president in modern history in just 16 months? Yep, me too.  He’s not only done more in that short time than any president since FDR, but he’s also rolled back almost all of his predecessor’s two-term, so-called legacy legislation, executive orders, and regulations.  16 months [of Trump] … and 8 years of Obama is just about gone.” — Lou Dobbs, Fox Business Network video clip, June 1, 2018

What a stretch of the facts!  But the problem here is not Dobb’s blatantly unjustified assessment.   The problem is that Lou Dobbs betrays his conservative audience with his assurance that everything is moving nicely under the current president — so just sit back and watch the president perform.

Before we examine the betrayal issue, however, let’s take a look at Dobb’s claim.  Among his examples of Obama administration rollbacks, Dobbs lists “executive orders and regulations.”   He seems to be referring to the disapproval by Congress of several administrative rules issued by the outgoing Obama administration in its waning days — hardly a major roll back of eight years of Obama.

But how about other key areas?  Let’s take a brief look at the lack of progress in three — the Culture War, energy independence, and “trade” — that contradicts Dobb’s claim.

Revolutionary forces have waged a Culture War in America for decades — a ubiquitous assault upon America’s moral, spiritual, and cultural underpinnings.  They have drawn support from the writings of Italian Communist theoretician Antonio Gramsci, who argued that the road to power in the developed countries was “to capture the culture.”  Gramsci focused particularly on undermining what George Washington regarded as necessary for the support of a free society — religion and morality.   And President Obama certainly picked up the Gramscian torch:

The Obama administration’s decision to force our military to cope with multiple aspired non-biological genders was a clear subversion of military effectiveness and morale.  And so, President Trump’s March 2018 order was popular in conservative quarters:

“President Trump released an order Friday night banning most transgender troops from serving in the military except under ‘limited circumstances,’ following up on his calls last year to ban transgender individuals from serving.” — CBS News, March 24, 2018

However, the President’s order was quickly blocked by several court challenges, and four federal courts quickly ruled against the ban. The matter is now working its way through the courts.

Indeed, much of the public perception regarding President Trump’s accomplishments is due to the Left’s reaction to his threats or orders (such as his order temporarily banning Syrian refugees).  But Trump generally allowed his orders to be blocked by radical courts or neutered.  We are reminded of Andrew Jackson’s famous alleged response to a 1832 decision of U.S. Supreme Court Chief Justice John Marshall: “John Marshall has made his decision; now let him enforce it.”

That’s the story, in a nutshell, of the ongoing Culture War.  Although it was the Supreme Court, not the Obama administration, that legitimized same-sex marriage, President Obama and a sympathetic Establishment media supported an agenda that undermined public resistance to the decision.  And President Trump has accepted the decision as okay.

The inroads of the Culture War are still in place, and the war is still raging unchallenged, with the public being hammered into submission.  Indeed, that war will continue until the public is informed as to its real aim — to make freedom unsustainable — and the sponsors of the groups promoting the clever, but phony pretext of tolerance are exposed for their real agenda.

As another example of lack of progress, where is the substance from Trump’s announced “intention” to withdraw from the Paris Climate Accords, which were signed by President Obama?  The earliest the U.S. withdrawal might take place  would be November 2020, (unless, as Trump demands, the U.S. could get more favorable terms)?

In the meantime, we have not seen any progress toward putting the U.S. on the road to energy independence.  For example, where are the new nuclear power plants being built to increase U.S. reliance on nuclear power (as of 2015, France generated 40 percent of its electricity with this American technology, now blocked from use in the U.S.)?  Or when will American companies be allowed to tap our vast reserves of shale oil?

A more fundamental weakness is the failure of the Trump administration to enlighten the public, even with tweets, as to the agenda and fundamental deception of the environmental movement.  In particular, the administration is not telling the public that high-level Insiders have promoted the fiction of catastrophic man-made climate change as a pretext for a power grab.  And the battle for sufficient energy at an affordable cost cannot be won without the support of an informed public.

Or how about the misplaced focus in the president’s plan to renegotiate NAFTA to get a better deal?  NAFTA is a deceptive Internationalist attack on the freedom and independence of the United States.  It is designed to imitate the similar deception of the European Common Market, which led to the European Union.  NAFTA is much more than a trade agreement.  And the U.S. needs leadership to get us out of the trap.  “Fair trade” is not the issue.  (See our web post, “Renegotiate NAFTA? No Way! — Get US out!”)

“This President Is a Marvel”

Much of President Trump’s real accomplishment has been to energize the Left while putting many conservatives to sleep. Both Lou Dobbs and Fox News are major forces helping to achieve the latter.  They are promoting the great American swindle that a president is supposed to run our nation and that the job of a responsible public is merely to choose every four years between the GOP and Democratic contenders, as vetted by the Establishment.

In a portion of his three-minute video commentary, Dobbs “marvel[s] at President Trump’s abundant, even endless energy,” and lists the following examples:

“And now he’s slapping tariffs on Mexico and Canada because they won’t negotiate on NAFTA and the European Union because, well, just because they deserve it.

“Negotiating to denuclearize the Korean Peninsula and undeterred by the massive odds against success, an unlikely success, admittedly, but one that would cause the world to catch its breath — just the kind of odds that President Trump has overcome in his extraordinary life.”

If we were seeking to pump Trump, we could easily list more credible actions.  For example, we were surprised that Dobbs didn’t mention the tax cut or President Trump’s court appointees.

Instead, Dobbs mentions that Trump signed the “The Right to Try Act.”  The Senate passed the Act last year by “unanimous consent” without a recorded vote. The Act changes the FDA procedures to allow critically ill patients to “try” experimental, potentially live-saving drugs.   While this may deliver on one of Trump’s promises, the Dobbs and Fox focus camouflages the very real danger threating our nation (see below).

Dobbs concludes his endorsement with these words:

“And all the president is doing is leading, and as, he promised, winning.  And, yes, he keeps tweeting as well.

“And if you’re confused about what he’s doing about the massive trade deficit with China, bringing 323 actions and 301s as well, tariffs on imported steel and aluminum, tariffs against Canada, Mexico, and the European Union tomorrow, well, just read the most succinct policy statement that a president has ever written.  It reads, here’s his tweet:  ‘Fair trade, explanation point.’

Covering Up the Real Threat

Lou Dobb’s endorsement will certainly gain him approval from Trump fans, and help keep them hooked on Fox.   But Lou Dobbs is not a “watchman on the tower” blowing a trumpet to warn of impending danger.

Instead, Lou Dobbs and Fox are playing a flute to put their viewers to sleep.

Both the conservative and Leftist wings of the CFR-controlled media serve the Internationalist Conspiracy by covering up its existence, influence, and agenda, while entertaining their audiences with relatively minor conflicts (see, for example, our web post, “The John Bolton Charade”).

Indeed, our web post, “The John Bolton Charade,”also demonstrates how the Establishment media hype phony leaders to conservatives. John Bolton, President Trump’s choice for National Security Advisor and most recently a Fox News analyst, is no real foe of the UN.  While both complain about the UN, they also accept the legitimacy of the UN.   But the Internationalists created the UN through deception as a step to an unaccountable world order run by them (see our web post, “The UN — Freedom’s Enemy”).

And the most prominent front group for this cabal in the U.S. is the Council on Foreign Relations (CFR), of which John Bolton has been a veteran member since 2000.  For many years, Rupert Murdoch, the founder and current CEO of Fox News, was also a member.   So perhaps it is not surprising that Fox News and its voices do not expose this group and its subversive agenda.

Most viewers of Lou Dobbs would regard him as a “conservative,” although he describes himself as an “independent populist.” Independent?  The notion that the major media conglomerates have no agenda other than making money is a myth.  They do not just hire anyone whom they believe can deliver exceptional ratings, and then give them a free rein.  And let’s be careful of the not so well understood term “populist.”  Jimmy Carter also described himself as a “populist.”

Like so many of his popular “conservative” colleagues, Dobbs provides doses of commonsense based on a seriously deficient view of what is driving America’s problems.

Indeed, the accolades Lou Dobbs paid to President Trump say a lot more about Dobbs and Fox than they do about the president.