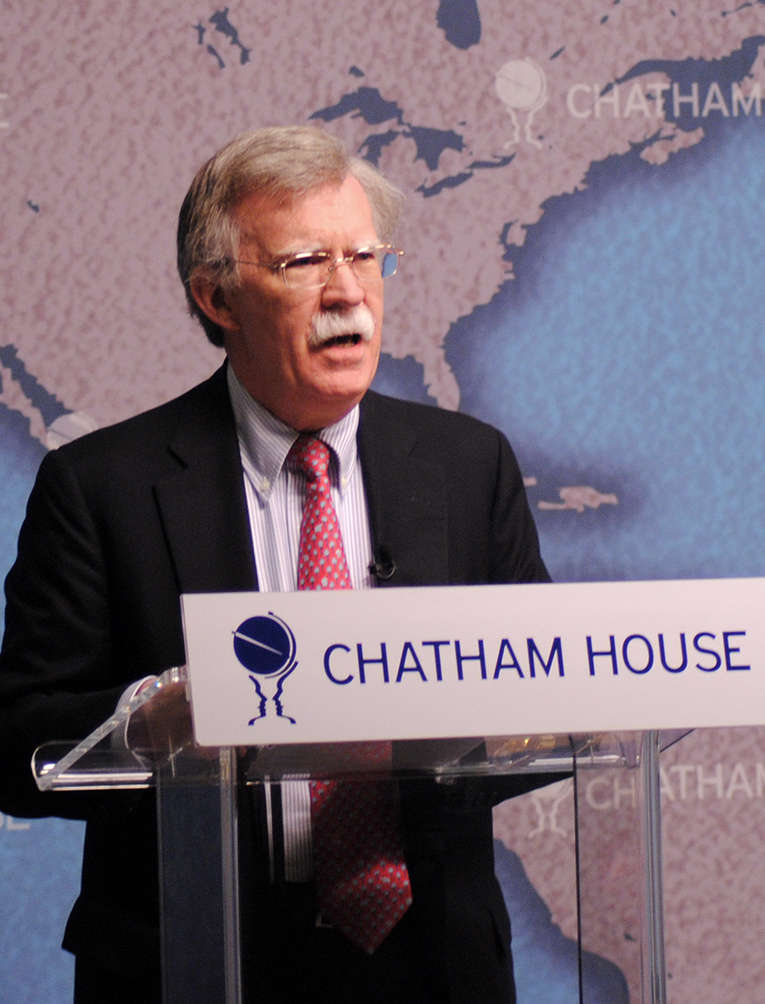 “‘Maybe one of the worst mistakes that President Trump has made since he’s been in office is his employment of John Bolton, who has been advocating a war with North Korea for a long time and even an attack on Iran, and who has been one of the leading figures on orchestrating the decision to invade Iraq,” [former President Jimmy Carter, CFR, Trilateralist] said. He called the appointment, announced last week, ‘a disaster for our country.’” —, USA Today, 3-26-18

“To [J.P.] Morgan all political parties were simply organizations to be used, and the firm always was careful to keep a foot in all camps.” — Professor Carroll Quigley, Bill Clinton’s mentor at Georgetown University, Tragedy and Hope: A History of the World in Our Time(New York: Macmillan, 1966), p, 950

Establishment strategists have long hyped conflict in which they pick, control, or influence both sides.  In this, they follow the practice of the promoters of professional wrestling matches.  Several purposes are served.   Foremost is to direct conservative public attention into “safe” channels, thereby hampering the development of any serious opposition to the goal of an Insider Conspiracy — unaccountable world power.

Establishment strategists also use conflict and their dominance of the media of communications to promote “safe” leaders who will appeal to different public factions.  For the conservative faction, they provide phony “conservative” leaders.

A clever way to convince conservatives to adopt an Establishment figure as one of theirs is to have that figure attacked by the Left.  Leftist voices also need causes to maintain their loyal support.  Opposing political figures who have a conservative image, even if it’s a phony image, helps fill that need.

This played out recently with the extensive criticism from the Left of President Trump’s selection of former UN ambassador John Bolton as his National Security Advisor, effective April 9, 2018.

Liberal attacks on Bolton started as far back as 2005. When President George W. Bush nominated Bolton to be the U.S. ambassador to the United Nations, Senate liberals attacked Bolton for being too conservative and anti-UN.   In one Senate exchange, Senator Barbara Boxer (D-Calif.) told Bolton:  “You have nothing but disdain for the U.N.”

The attacks helped both Bush and Bolton shore up their images as conservatives.  Following repeated Senate stalling in processing the nomination, President Bush made a recess appointment of Bolton, who served as UN ambassador for a little more than a year (August 2, 2005 – December 31, 2006).

Following the announcement of President Trump’s appointment of Bolton, much of the previous criticism from the Left was recycled.

Newsweek, now managed by a former editor of the liberal Huffington Post, published an opinion piece, “John Bolton is a Threat at Home and Abroad,” by Patrick Eddington:

“In Bolton, Trump will have a kindred spirit who sees enemies everywhere and who does not hesitate to attack them, at home or abroad.” — Newsweek, 4-8-18

Much of the Establishment media also highlighted criticism of Bolton:

“Bolton, probably the most divisive foreign policy expert ever to serve as U.N. ambassador, has served as a hawkish voice in Republican foreign policy circles for decades.” — AP (3-22-18)

But the media reaction was not all negative. The Trump White House was able to trumpet a bunch of favorable headlines and reactions from the national press. Here are several:

“President Trump has said he is at last assembling a Cabinet team to his liking, and late Thursday he announced that John Bolton will replace General H.R. McMaster as his National Security Adviser. It is a solid and experienced choice….”

“The president’s decision to appoint John Bolton as his national security adviser reflects an understanding of the critical lessons of history, and the Bolton designation will greatly reduce the grave risks now faced by America during today’s increasingly troubled times.”

[FFS:  We don’t trust Tom Coburn.  He has dedicated himself to the well financed effort to mislead state legislatures into calling for an uncontrollable constitutional convention.  In March of 2015, he appeared on Rupert Murdoch’s Fox News promoting a Convention of the States to eliminate “waste, fraud, or duplication.” Coburn repeated a clever deception of proponents:  “It’s an Article V convention of states.  It’s not a constitutional convention.”   He also falsely claimed that the Founders wrote Article V so we could put limits on government.  No, they gave us the Constitution to do that.]

[FFS:  What National Review would have us believe is “mainstream” is an outrageous audacity.  National Review has served as an Establishment tool to mislead and neutralize conservatives since the days of William F. Buckley, Jr.]

THE NEW YORK TIMES’ BRET STEPHENS: John Bolton is Right About the U.N.

“I agree with Bolton about some things and disagree about others. But on the U.N. he’s been right all along.  If his presence in the White House helps to scare the organization into real reform, so much the better.”

AMERICAN ENTERPRISE INSTITUTE’S MICHAEL RUBIN IN THE WASHINGTON EXAMINER:  Enough with the John Bolton Smears — He’ll be the Best National Security Adviser in a Generation

“But Bolton is a formidable intellect, a clear thinker, organized, and a team player. The purpose of the National Security Council is to coordinate the interagency process.”

HUGH HEWITT IN THE WASHINGTON POST: John Bolton is a Great Addition to the White House

“As the president’s top security aide, Bolton will be an honest broker and someone who can drive decisions through molasses-thick resistance. These qualities, plus his top-shelf intellect, make Bolton the best national security player to join Trump’s West Wing team so far.”

John Bolton has solid Establishment credentials ignored by the media. Instead, media stories highlighted the fact that Trump was recruiting again from the “conservative” Fox News, where Bolton had most recently been serving as an analyst:

“Trump’s new national security adviser, John Bolton, is a former U.N. ambassador, a White House veteran — and perhaps most importantly a Fox News channel talking head…. ‘He’s looking for people who are ready to be part of that television White House,’ said Kendall Phillips, a communication and rhetorical studies professor at Syracuse University. ‘This is the Fox television presidency all the way up and down.’” [Emphasis added.], AP, 3-25-18

The misleading superficial news reports did not mention Bolton’s Establishment credentials as a veteran member of the Council on Foreign Relations (CFR) or those of Fox News founder Rupert Murdoch (CFR).

Indeed, Bolton was invited to join the CFR has far back as 2000.  Bolton could even boast earlier articles in the Council’s magazine, Foreign Affairs.  For the January/February 1999 issue he wrote: “The Global Prosecutors: Hunting War Criminals in the Name of Utopia.” The article spelled out Bolton’s criticism of the UN’s International Criminal Court (ICC) and why he objected to U.S. membership.

In its 2000 Annual Report, the Council on Foreign Relations revealed an even closer relationship:

Bolton’s opposition to the ICC, while serving in the Bush State Department, helped establish his “conservative” credentials. However, in a November 14, 2002 speech to the Federalist Society, he explained that the Bush administration only objected to the ICC in is present form, but would like to see “ad hoc tribunals … overseen by the UN Security Council [and] under a UN Charter to which virtually all nations have agreed.”

John Bolton has associated with many organizations, particularly those that have a conservative image and are dominated by the Establishment.  A noteworthy example is the CFR-dominated “Project for the New American Century” [PNAC]. PNAC was formed in 1997 by a team that included former CFR Director Dick Cheney and William Kristol, who became its chairman.  Kristol had vehemently opposed the nomination of Donald Trump, now enthusiastically embraced by Fox News.  Yet in 1995, Kristol had helped found and edit the neo-con Weekly Standard magazine financed by Rupert Murdoch (CFR), who would later found Fox News.  Establishment strategists undoubtedly regard apparent conflict as necessary to gain a following and therefore useful, if kept within bounds.

John Bolton has attended the exclusive, invitation-only Bilderberg Conferences of high-level Insiders, such as Henry Kissinger and Richard Haass (the current President of the CFR).

On January 21, 2003, Bolton was invited to address the London-based Royal Institute of International Affairs, also known as Chatham House, the British counterpart to the CFR.

The Real Bolton and the UN

At a presidential press conference held on April 28, 2005, a journalist asked President George W. Bush about the controversy surrounding his nomination of John Bolton as UN Ambassador. The president’s reply included this story:

“Now, I asked John during the interview process in the Oval Office, I said, before I send you up there to the Senate, let me ask you something: do you think the United Nations is important? See, I didn’t want to send somebody up there who said, it’s not — it’s not worth a darn; I don’t think I need to go. He said, no, it’s important. But it needs to be reformed.”

What a charade!  For many decades, calls to reform the UN have been used to shield the increasingly unpopular UN from demands to get the U.S. out!  and thereby abolish it altogether.  Indeed, U.S. withdrawal would be totally unacceptable to the Insiders at the CFR.

Recall that CFR Insiders saw World War II as an opportunity to overcome the U.S. Senate refusal to join the Internationalists’ League of Nations following World War I.  Within two weeks of the outbreak of new war in Europe, and a full two-years before Pearl Harbor, trusted CFR members were allowed to take over postwar planning for the U.S. State Department.  Absorbed into the State Department, they designed the UN and orchestrated the cry for U.S. membership in the UN as “mankind’s last best hope for peace.”

We don’t know what John Bolton might recommend re North Korea, but one thing we know for sure — he won’t push for the U.S. to withdraw from the United Nations.   “Reform” sure.  Criticize yes.  But withdraw no.

“Walking away from the United Nations is not an option…. The United States is committed to the success of the United Nations, and we view the UN as an important component of our diplomacy…. Now more than ever the UN must play a critical role, as it strives to fulfill the aspirations of its original promise….”

“There’s no doubt that this is an organization that needs updating and reforming in order to be effective…. And, we’re a founding member of the United Nations. We shouldn’t abandon it. We should make it a stronger instrument.”