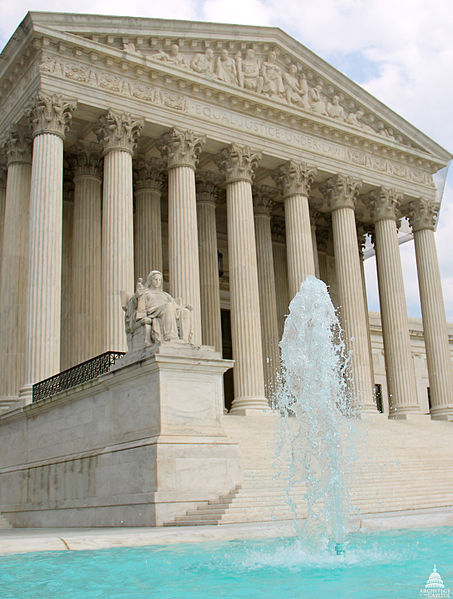 For Whom the Court Toils

What most Americans considered unthinkable just a few decades ago — Supreme Court mandated recognition of same-sex marriage —is now reality. Those concerned about the widespread attack on traditional morality and the family would do well to learn more about what the Supreme Court has done, what drove the decision, and what can and must be done to return America to Constitution-based Federal-Court rulings.

There are few Supreme Court rulings, we must assume, where a large number even of those supporting the decision feel compelled nevertheless to repudiate, publicly, the Court’s reasoning. Yet there was widespread, serious dissatisfaction among those who longed for the Court to vindicate same-sex marriage and who read its opinion.

One of the clearest summaries of the consensus spanning the political spectrum comes from just such a same-sex-marriage supporter:

To phrase things delicately, the Supreme Court’s recent decisions in King v. Burwell and Obergefell v. Hodges are unequivocally horrendous. Legal textualists and political conservatives will remember these majority opinions as among the worst of the twenty-first century. While Kelo v. New London and NFIB v. Sebelius were equally despicable, these cases at least were based on plausible, albeit highly flawed, interpretations of existing law. King and Obergefell, in contrast, are purely results-oriented decisions that are at best maladroit workmanship and at worst flagrant judicial usurpations of legislative authority.

Was Obergefell really an instance of well-intentioned but “maladroit workmanship” or instead one of ill-intentioned, “flagrant judicial usurpation of legislative authority”? And if the latter, what was the real motive?

Same-sex-marriage supporters had generally expected the Court to pursue the line of argument usually taken in same-sex marriage cases that had been brought in state courts. That line was based on the Fourteenth Amendment’s “equal protection” clause: That clause forbids every state to “deny to any person within its jurisdiction the equal protection of the laws.”

The contention was that, given this clause, marriage laws should not treat homosexual couples any differently than they treat heterosexual couples.

However, for reasons that we explain in a separate article, an argument based on “equality” alone would have been quite frail and susceptible to devastating criticism. Another main argument was needed. And for this, the majority availed themselves of the long discredited appeal to the Fourteenth Amendment’s “substantive due process” clause.

And, in doing so, the majority, led by Justice Kennedy, relied on a slippery meaning-change for the term marriage.

In the view of Chief Justice Roberts, who strongly opposed the ruling, that slippery meaning-change was, in fact, the real point:

Roberts summarized his objection to the very thinly argued case of the proponents: “The majority’s decision is an act of will, not legal judgment.” The other dissenting Justices seemed to agree.

For Whom, REALLY, Was This Ruling Made?

But why would a majority of the Supreme Court risk their judicial reputation on such an obviously unconstitutional decision – which is already seen widely as such? What goal would make it worthwhile? And in particular, if the justices didn’t see “dignity”-seeking gays as the constituency that their ruling was serving, whom did they see it as serving?

A scholarly article, by Douglas NeJaime, in The Yale Law Journal in Sept. 2013, helps us answer that question. That article approved thoroughly of Justice Kennedy’s redefinition of marriage as expressed in United States v. Windsor (2013, striking down the Defense Of Marriage Act), also using the “substantive due process” approach to gay rights that he had first displayed in Lawrence (2003). And the article argues that the redefinition is responding to a revolutionary movement:

This Essay relates Windsor to a model of marriage ascendant over the course of the last several decades and to LGBT advocacy that has mapped same-sex couples onto that model. … a shift from a marriage model rooted in procreation and gender differentiation to one characterized by mutual emotional support, economic interdependence, and community recognition. … Justice Kennedy’s treatment of marriage in Windsor fits within this trajectory….

Of course, the Court is not conceptualizing marriage and its relationship to same-sex couples in a vacuum. Instead, it is responding to legal, cultural, and demographic shifts relating to marriage, as well as to LGBT advocates’ appeal to those shifts to claim rights for constituents. … Beginning in the 1980s, LGBT advocates mapped same-sex couples onto ascendant marital norms that stressed adult romantic affiliation and emotional and financial interdependence—marriage’s private dimensions….

Justice Kennedy’s rendering of marriage in Windsor is responsive to LGBT advocates’ contextualization of same-sex couples within extant marital norms. [Emphasis ours.]

Hey! Hang on a minute: Who are these “LGBT advocates,” to whose “contextualization of same-sex couples within extant marital norms” Kennedy’s new treatment of marriage “is responsive”?

Well, there were the more open advocates, and the more secretive ones: but they had all been pushing, for many years, the strategy of holding out same-sex “marriage” as just another, valid kind of marriage. Michael Gerson, exulting over the Obergefell v. Hodges ruling, credits two of the better known advocates of this strategy:

Why has the gay rights movement been so dramatically successful? Certainly, the people who came out to family and friends — often at considerable risk and cost — humanized an abstract debate. Fictional gay characters — see “Glee” and “Modern Family” — did much the same.

But perhaps the most significant shift in strategy came from public intellectuals such as Jonathan Rauch and Andrew Sullivan, who urged gays to embrace the conventional, bourgeois practice of marriage. What had seemed to many Americans a sexual liberationist movement requested access to the institution designed to limit sexual freedom for the sake of social order and effective child-rearing (while delivering joys that arise only out of commitment). Many gay rights advocates essentially made conservative arguments — concerning the individual and social benefits of faithfulness — to secure their legal goal.  It is a form of gay rights that Middle America — already inclined to live and let live — could readily embrace.

Then there were the more private “LGBT advocates” — the revolutionaries making the war plans and directing the troops. If anyone doubts the existence of a more or less secretive cabal of LGBT war-planners, they should read articles that have been documenting their subversive agenda since the 1990’s.

In 1989, Marshall Kirk and Hunter Madsen, professionals in neuropsychiatric research and commercial advertising, respectively, published After the Ball: How America will conquer its fear and hatred of gays in the ’90s. Their book constituted a manual for the “overhauling of straight America.” In particular, they mapped out a strategy for deceptively promoting homosexuality in entertainment, the media, and education under the guise of a struggle for homosexual “rights”:

At least at the outset, we seek desensitization and nothing more. You can forget about trying right up front to persuade folks that homosexuality is a good thing. But if you can get them to think that it is just another thing — meriting no more than a shrug of the shoulders — then your battle for legal and social rights is virtually won.

But their ultimate objective was the conversion of straight America:

[B]y Conversion we actually mean something far more profoundly threatening to the American Way of Life…. We mean conversion of the average American’s emotions, mind and will, through a planned psychological attack, in the form of propaganda fed to the nation via the media. We mean ‘subverting’ the mechanism of prejudice to our own ends — using the very processes that made America hate us to turn their hatred into warm regard — whether they like it or not. (p. 153)

According to Douglas NeJaime, it is to such (revolutionary, subversive) “advocates” that Justice Kennedy’s new treatment of marriage “is responsive.”

In short, the Supreme Court ruling was not an attempt to enforce ostensibly Constitutional rights. Its intention was a revolutionary one, and it had no other motive.

Therefore, the solution is not in another Court case or better arguing before the Court. Justice Alito was unfortunately mistaken in believing that his “colleagues in the majority sincerely see in the Constitution a vision of liberty that happens to coincide with their own.” Yet in the same passage he shared some perceptive concerns about the future of American jurisprudence:

Today’s decision shows that decades of attempts to restrain this Court’s abuse of its authority have failed. A lesson that some will take from today’s decision is that preaching about the proper method of interpreting the Constitution or the virtues of judicial self-restraint and humility cannot compete with the temptation to achieve what is viewed as a noble end by any practicable means. …

Most Americans—understandably—will cheer or lament today’s decision because of their views on the issue of same-sex marriage. But all Americans, whatever their thinking on that issue, should worry about what the majority’s claim of power portends.

That last statement is exactly right. This Court has thrown out the Constitution and the American system of jurisprudence. Its decisions no longer have anything to do with them.

And lest anyone think that the revolutionary assault is over, they need to realize that revolutionaries are never satisfied, short of total revolution. With any victory, standard revolutionary practice is just to up the ante.

Using the same tactics used by “gay” rights activists, pedophiles have begun to seek similar status arguing their desire for children is a sexual orientation no different than heterosexual or homosexuals.

Critics of the homosexual lifestyle have long claimed that once it became acceptable to identify homosexuality as simply an “alternative lifestyle” or sexual orientation, logically nothing would be off limits.

The story documents studies and federal actions already underway leading up to just such legitimization of pedophilia. It would be a great mistake to put beyond this current Supreme Court the overturning of state laws against pedophilia.

This Court understands only power – and, the ability and will to use it. Therefore, the only solution available to us is to learn about, and then to show the courage and ability to wield, the powers that we have under the Constitution for the reining in of a rebellious, or even revolutionary Supreme Court.

As Don Fotheringham has explained, impeachment is not the only solution – although certainly it is one route available. Another, of which most Americans are unaware, is to restrict the appellate jurisdiction of the Supreme Court. Don Fotheringham explains the means that the Constitution provides for curbing a federal judiciary run amok, in the lead article for our “Campaign for Decency – Curb the Courts.”

This concerted-action campaign needs the volunteer membership of many concerned Americans, to help convince Congress to reign in this revolution-seeking Supreme Court. Moreover, an out-of-control Supreme Court is only one part of a larger revolutionary assault that must be confronted in its entirety. We invite readers to consider the program of Freedom First Society.