What You Won’t Hear on Fox 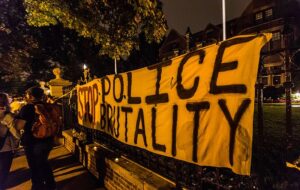 “A coalition affiliated with the anti-racism Black Lives Matter movement called for criminal justice reforms and reparations for slavery in the United States among other demands in its first policy platform released on Monday….

“The agenda was released days before the second anniversary of the slaying of unarmed black teen Michael Brown by a white police officer in Ferguson, Missouri. Brown’s death, along with other fatal police shootings of unarmed black men over the past two years, fueled a national debate about racial discrimination in the U.S. criminal justice system.” [Emphasis added.]
— “U.S. slavery reparations sought in first Black Lives Matter agenda,” Reuters (Yahoo News), 8-1-16

Rather than informing the public, the mainstream media slavishly cooperate with revolutionaries to provide “pressure from below” by reporting their propaganda at face value, even using that pressure and media coverage to suggest there has been a genuine “national debate” (see above).

Of course, the mainstream “liberal” media say nothing about the real agenda driving these movements. But what about the media that portrays itself as providing the other side of the story, designed to appeal to conservatives?

There you will find plenty of discussion of current issues from a conservative standpoint, but discussion primarily restricted to media-managed “common understanding.” The subversive forces and their agendas that are creating our problems are not part of that understanding.

A good example is the reaction of “conservative” media outlets to the revolutionary “furor” over police shootings of blacks. In the argument over whether a particular policeman’s action was justified, you won’t hear what people desperately need to learn in order to preserve their freedom.

The Real Objective — Pave the Way for a Police State

You won’t hear that, in 1961, the Internal Security Subcommittee of the United States Senate published “A Communist Plot Against the Free World Police,” describing a highly organized campaign “directed primarily toward discrediting the police in the eyes of the people.” A principal tactic of that campaign was to charge local police with “brutality” and demand outside oversight, initially by leftist-controlled civilian review boards.

The world Communist movement (supported by the Insiders) developed the campaign to undermine a critical bastion of freedom — independent, decentralized local police, accountable to the communities in which they live. The ultimate goal was, and is, to nationalize our local police. (See also Media-Controlled Delusion, Chapter 2 “Police Brutality.”)

The liberal media emphasize the phony idea that federal oversight is necessary to overcome all kinds of state and local shortcomings and un-American biases. And the conservative media provide stirring rebuttals to engage their audience, but they ignore the real threat. Why? Not because they don’t know what’s going on, but because at the top, they, too, are Insider-controlled.