Toward a Police State 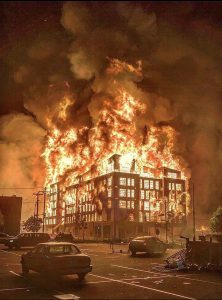 Burning Minneapolis building during May 2020 riots

The escalating nationwide demonstrations and riots during the past several days have a very sinister purpose, which few Americans understand and about which the voices they look to for leadership are silent.

We are talking about the decades-long campaign to discredit, demoralize, and cripple local independent police in order to pave the way for a national police force or even foreign UN troops to restore order.  That is not to say that local police forces don’t sometimes have bad apples.  Indeed, the presence of bad apples serves the campaign. But a national, unaccountable police force is no cure.  It is a gross betrayal of a free nation.

The first thing to realize is that riots and demonstrations in more than 75 cities nationwide are not spontaneous reactions. They are organized by revolutionaries to advance a subversive agenda, using the pretext of opposing police brutality.  The ghastly torture-killing of George Floyd has been used for that purpose.

As did much of the controlled-media, The New York Times (5-31-20) attributed the escalating demonstrations to “an outpouring of national anger sparked by the death of a black man in police custody.”  But angry individuals don’t just congregate at the same place and time with prepared banners, painted signs, slogans to chant, constant clenched-fist salutes for the cameras, and marching orders.

The foreword to our January 2015 Action Report, below, documented the deceptions and subversive purpose of the demonstrations that followed a 2014 police-killing in Ferguson, Missouri.  The demonstrations supply “pressure from below” for government power grabs, but the pressure wouldn’t have much effect if the Conspiracy that supports the revolutionaries and controls the major media didn’t seize the opportunity to apply “pressure from above.”

Understandably, the controlled-media support the revolutionary ruse as to what’s driving the demonstrations by refusing to go beyond the police-killing pretext.   In doing so, the media are actually cooperating with the organizers in keeping national attention where the organizers want it.  The driving revolutionary organization depends on that cooperation to create the illusion of widespread support.

A useful tactic of revolutionary communist organization has been to create appropriately targeted front groups to attract additional support for the demonstrations and give credibility to their advertised complaints about “police brutality.”

Intermediate successes in the past have included forcing big-city police departments to submit to oversight by revolutionary-controlled “civilian review boards.”  And further militarizing our police in violation of the Posse Comitatus Act of 1878, which bars military involvement in domestic law enforcement, unless “expressly authorized by the Constitution or Act of Congress” would be a major revolutionary success.  The Act constitutes an important safeguard against the creation of a police state.

Yet, as reported by The Hill (5-29-20), President Trump was willing to violate that act in response to the violence in Minneapolis:  “These THUGS are dishonoring the memory of George Floyd, and I won’t let that happen. Just spoke to Governor Tim Walz and told him that the Military is with him all the way. Any difficulty and we will assume control….”

Of course, attributing the violence to “THUGS” is itself a refusal to alert Americans to the revolutionary game plan. Minnesota Governor Tim Walz, also refused to acknowledge the root of the violence.  According to The Washington Times (5-30-20):  “An overwhelmed Minnesota Gov. Tim Walz said Saturday that he had reached out to the Pentagon for help in controlling the growing mobs of out-of-state agitators seeking to “break the back of civil society” in the wake of George Floyd’s death.

The “pressure-from-below, pressure-from-above” game plan is not new.  We conclude here with the promised foreword to our January 2015 Action Report, written following protests in the wake of the 2014 police-shooting in Ferguson, Missouri.

“The Rest of the Story”

When protesters burned down a convenience store near where a police officer fatally shot Michael Brown [on August 9], many condemned it. But experts say the ensuing images on national television could become as much of a catalyst for social change as peaceful protests. [Emphasis added.]  — “Ferguson violence could be a catalyst for change,” USA Today, August 30

What has transpired in the wake of the police shooting in Ferguson, Missouri provides important lessons in media misdirection and concealed subversive organization and agendas.

Media Misdirection
Typically, the major media cooperate with revolutionaries by helping them develop pressure from below for “change” in the form of federal power grabs.  The media portray their protests as representative of widespread concerns and driven solely by the advertised complaints.  Nowhere do you find a suggestion that the protests might be designed to serve a far different purpose, and often there is no hint they are even organized.  Consider this example:

People protesting the Ferguson, Missouri, grand jury decision took to the streets in cities across the U.S. for a second day Tuesday, showing that the racially charged case has inflamed tensions thousands of miles from the predominantly black St. Louis suburb. [Emphasis added.]  — “Protests against Ferguson decision grow across US,” AP, 11-25-14

Did the decision ignite the protests and the riot?  Or were revolutionaries already looking for a pretext to protest?

Our answer:  Organized revolutionaries saw an opportunity and were eager to distort the facts to support their agenda.  Reviewing the grand jury decision not to prosecute Darren Wilson, even a reporter for the Establishment’s Time concluded:

Indeed, the preponderance of forensic and eyewitness testimony suggests that Wilson was acting in self-defense against a violent perpetrator…. But there can no longer be a question that the initial accounts of the case were fraudulent. — “Michael Brown was not a gentle giant,” Time.com, “Facts and Ferguson,” 11-26-14

Those who made it inside City Hall [in St. Louis] were part of a group of about 300 protesters who marched and held a mock trial of Darren Wilson, the Ferguson police officer who shot and killed 18-year-old Michael Brown during an Aug. 9 confrontation in the St. Louis suburb. [Emphasis added.] — “Protesters force lockdown of St. Louis City Hall,” AP, 11-26-14

And consider this USA Today report pointing to outside involvement:

On Friday night in Ferguson, 16 people were arrested outside the police station who had come from Boycott Black Friday protests at stores in the area, and 15 of them were not from Missouri. [Emphasis added.] — “Ferguson could spark a new civil rights movement”

Investigate the Rioters
Encouraged by the national attention, revolutionaries quickly staged protests in other cities over several “police killings.”  And, still the national media focused on charges of “police brutality” and “racism” while ignoring any nationwide organization to the protests.   A few AP examples:

Protesters around the country rallied for a third day Friday over a New York grand jury’s decision to not indict a white police officer in the chokehold death of an unarmed black man….

In Colorado, students walked out of class Friday to protest the decisions not to prosecute police in New York and Ferguson. — “Protesters of chokehold death rally for 3rd day,” AP, 12-5-14

About 150 took part in the march through the streets of downtown Phoenix to police headquarters, while also calling for an end to what they say is a nationwide epidemic of police brutality.” [Emphasis added.]  — “Phoenix police shooting is latest to ignite outcry,” AP, 12-5-14

The War on Local Police

Ignored by the major media, Establishment Insiders and their revolutionary kin have labored for decades to undermine a bastion of freedom — independent, local police, who live in the communities they serve — and to gradually replace them with a national police accountable to a central government and eventually to international regulation.

In 1961, the Internal Security Subcommittee of the United States Senate published “A Communist Plot Against the Free World Police,” describing a highly organized campaign “directed primarily toward discrediting the police in the eyes of the people.”

The report included pages from a Communist document used to train revolutionaries worldwide on how to organize a riot.  Illustrations showed how to outflank and attack the police.

At a press conference following the 1965 Watts riot, Michael Laski, a member of the Central Committee of the U.S. Communist Party, boasted that he and his organization had worked for two years to agitate the riot, which he called a “class uprising.”

One of the early initiatives in this campaign was the push for “civilian” review boards as a cure for alleged rampant “police brutality.” The leftist controlled boards were actually established in some cities, before grassroots action forced their demise.  FBI Director J. Edgar Hoover described their effect: “Where there is an outside civilian review board the restraint of the police was so great that effective action against the rioters appeared to be impossible.”

And, of course, if the local police were no longer able to maintain law and order, Big Brother would be eager to step in.  Indeed, widespread riots in this country provided the Insiders with the pretext to create the federal “Law Enforcement Assistance Administration” [LEAA] in 1968.  The LEAA sought to gain control of state and local law enforcement agencies through federal grants.   But LEAA Administrator Charles H. Rogovin hinted at another route.  On October 1, 1969 he told a meeting of the International Association of Chiefs of Police that a federal police force may need to take over “because local law enforcement has failed to do its job.”

The LEAA was abolished in 1982 following concerted grassroots pressure. But the Conspiracy never gives up. Later came the federal civil-rights lawsuits against major city police departments, resulting in consent decrees, amounting to a virtual federal takeover.  And still later, the terrorist attacks of September 11, 2001 provided the emotional cover for the consolidation of police powers in the Department of Homeland Security.

New Federal Intervention
The Obama administration is already taking support from the revolutionary pressure from below as an excuse to “investigate law enforcement” rather than the rioters:

President Obama opened a speech in Chicago by talking about Ferguson, saying that he had ordered Attorney General Eric H. Holder Jr. to undertake a major review of policing practices in the United States, including a community-by-community process of identifying and highlighting specific steps to “make sure that law enforcement is fair and is being applied equally to every person in this country.” — “Security in Ferguson Is Tightened After Night of Unrest,” NY Times, 11-25-14

But apparently Holder was on board well before the Ferguson eruptions:

On Thursday [12-4-14], Attorney General Eric Holder said a Justice Department probe had concluded the Cleveland Division of Police has a pattern of using excessive force, both in firing weapons and in using non-deadly techniques. Cleveland officials agreed to an outside monitor to improve training and practices, officials said. [Emphasis added.] — “Police Move to Revamp Tactics,” Wall Street Journal, 12-5-14

The Journal article suggests what is coming: “Police departments around the country are racing to develop new training rules on the use of force, a response that has gained urgency amid scrutiny from the U.S. Justice Department and an emerging consensus that law-enforcement practices need to be reviewed and revamped….” [Emphasis added.]

The orchestrators of pressure from below do not go to so much effort unless they have some serious plans to make a major step in their long-term agenda.  We will keep our members advised as to where the new focus lies.