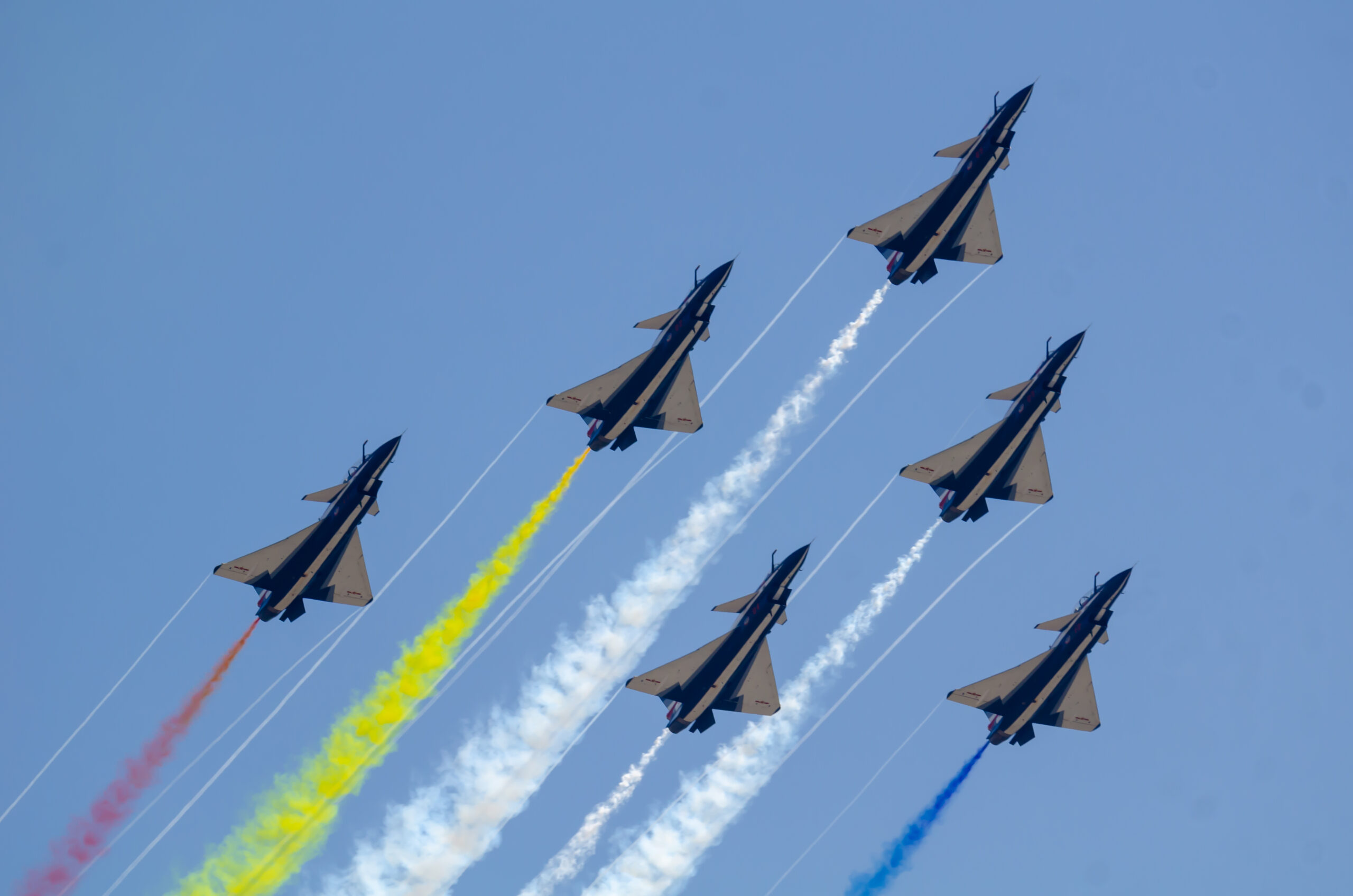 The Only Responsible Option

“[T]here is no secret about how [China] plans to destroy American aircraft carriers if rivalry becomes war….

“China’s military is now making giant strides toward replacing the United States as the supreme power in Asia. With the Pentagon distracted by almost two decades of costly war in the Middle East and Afghanistan, the Chinese military, the People’s Liberation Army (PLA), has exploited a period of sustained budget increases and rapid technical improvement to build and deploy an arsenal of advanced missiles.

“Many of these missiles are specifically designed to attack the aircraft carriers and bases that form the backbone of U.S. military dominance in the region….” [Emphasis added.] —  “Special Report: New missile gap leaves U.S. scrambling to counter China”— Reuters, 4-25-19

Even More Serious!
We must not forget that China is a threat today only because American Insiders enabled the Communists to take over China and nurtured Red China to become a world power. Those same forces dominate our media and government today and are using the China threat as part of their plan to enslave us all.

The Reuters’ claim that the Pentagon was “distracted” is simply distraction.  The “Special Report” continues:

“For more than half a century since China’s ruling Communist Party took power in 1949, a vast but technologically backward PLA [People’s Liberation Army] was largely confined to the Asian mainland and coastal waters.”

Obviously, no backward socialist economy develops economic and military prowess without outside help. 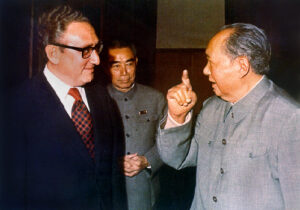 After the Red regime massacred the Chinese demonstrators in Tiananmen Square, Kissinger would defend the brutality. According to the Wall Street Journal, Kissinger Associates had a $7 million contract with the Chinese government.  Yet when Nikki Haley was appointed as U.S. Ambassador to the UN in 2017, she sought out Henry Kissinger as her personal foreign policy mentor. And, in September of last year, Haley misled conservatives with this assurance on Fox & Friends: “And Dr. Kissinger, you never have to worry that he’s not on America’s side.”

The Internationalists must also be pleased that China has leverage over the U.S. through China’s ownership of over $1 trillion of our national debt. A May 21 report on the Internationalists’ ForeignPolicy.com, “China Raises Threat of Rare-Earths Cutoff to U.S.,” points to further leverage: “Beijing could slam every corner of the American economy, from oil refineries to wind turbines to jet engines, by banning exports of crucial minerals.”  Thank you, Dr. Kissinger!

How about China’s “rapid technological improvement”?  President Bill Clinton should have been impeached over the Chinagate revelations — the corrupt transfer of U.S. military technology and industry to Communist China.  On August 25, 1988, House Majority Leader Dick Armey (R-TX) responded to the revelations: “The more you look into this business of the transfer of advanced, sophisticated technology to the Chinese military, which seems to be clearly for campaign contributions, the harder it is to stay away from words like treason.”

Managed News
Yet an irresponsible House of Representatives, under Establishment pressure, ignored these revelations in its articles of impeachment and, with media help, led the public to believe that President Clinton was impeached (but not convicted by the Senate) merely for “lying about sex.” Our Establishment media has insured that the public forgets about the Chinagate revelations.  Even during the recent investigations into Russian interference in the U.S. presidential elections, the documented evidence of China’s previous interference was ignored.  The American people are not victims of biased news, they are subjected daily to managed news serving totalitarian power grabs.

One facet of that managed news is to ensure that Americans forget the history of Internationalist betrayal.  Consider the following “conveniently forgotten” history, supported by several extensively documented books:

In early 1946, the Nationalist Chinese forces had Mao’s Reds on the run.  However, President Truman had sent General George C. Marshall to China to mediate the fighting, and Marshall forced Chiang to accept a cease-fire (one of several). Marshall would boast: “As Chief of Staff I armed 39 anti-Communist divisions, now with a stroke of the pen I disarm them.”… The Soviets, meanwhile, equipped Mao with vast stores of U.S. military supplies Truman had provided Stalin for the assault on Japan.

In early 1949, John F. Kennedy, a young second-term congressman from Massachusetts, protested the betrayal:  “What our young men had saved, our diplomats and our President have frittered away.”  Later, as Secretary of Defense, Marshall would also prevent General MacArthur from winning the Korean War. 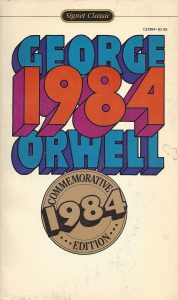 Orwell’s 1984 at Work
The Insider China perfidy was not limited to economic and technology transfers.  As National Security Advisor under Nixon, Kissinger also implemented the one-China policy that betrayed our Nationalist Chinese ally on Taiwan.  In 1971, Red China took over Taiwan’s “permanent” seat on the UN Security Council, joining the Soviets in out-voting the U.S.

With the U.S. outvoted by design, the Insiders continue to promote the CFR-created UN as essential for world peace.  But it’s really a set-up to dazzle the world with endless conflict and justify the progressive seizure of power, in the pattern of George Orwell’s 1984. 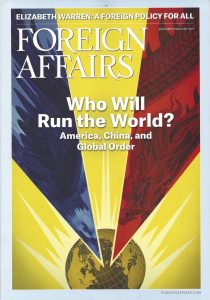 The January/February issue of the CFR’s Foreign Affairs hyped that strategy.  The cover headline asks: “Who Will Run the World?” with sub headline: “America, China, and Global Order” (see graphic, right).

Lesson: Insider-supported regimes murdered more than 100 million human beings during the last century to consolidate their power.  We must not expect the Internationalist Conspiracy to fade way or give up its bloodthirsty ambition on its own.  It will only be stopped and routed if there is informed pressure from the American people to do so.

Creating that informed pressure requires an organized campaign by a growing segment of the American people responding to sound leadership and immune to tangents.  That’s Freedom First Society’s mission.

Realistically, building and supporting Freedom First Society is the only responsible option for Americans to stop the approaching nightmare.  To be sure, success will require a breakthrough in finding dedicated, discerning volunteers among the too-busy and complacent.  After decades of culture war and Establishment attacks on the middle class, finding those patriots willing and able to lead by example is no easy task.

However, the alternative should be unthinkable:  Do nothing, or nothing constructive, and watch as our fellow Americans are slaughtered and starved to wipe out resistance to Internationalist tyranny. Think of all the patriots who gave their lives and fortunes to enable future generations of Americans to enjoy unprecedented liberty.  God forgive us, if we betray their sacrifice!