Following an agreement with Canada, President Trump claimed victory in the negotiations to replace NAFTA:

The president said it fulfills his campaign pledge to replace NAFTA, which he called “perhaps the worst trade deal ever made,” and claimed it will transform the U.S. back into a “manufacturing powerhouse.”

“Throughout the campaign I promised to renegotiate NAFTA and today we have kept that promise,” he said during a news conference, calling it “truly historic news for our nation and indeed the world.”  — The Hill, 10-1-18

The reality, however, is greatly different. NAFTA was much more than a “trade deal.”  And so is its proposed replacement — “The United States–Mexico–Canada Agreement” (USMCA). 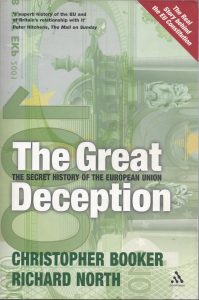 [Prime Minister Edward] Heath’s own bid to join the Common Market began what for the British people was to be the greatest deception of all….  Heath persistently misrepresented Britain’s membership of the Common Market as no more than a trading issue….

Only 30 years later would it come to light from the Foreign Office’s confidential papers just how conscious were its officials of the extent to which Britain was about to surrender its powers of self-government.  None of this was publicly admitted at the time, although the author of the FCO’s internal memorandum on “Sovereignty” justified the concealment by suggesting that the British people would not notice what was happening until the end of the century, by which time it would be too late to protest because the process would have become irreversible.

Edward Heath was not alone, even among British politicians, in perpetrating the deception.  “For 40 years,” says Booker, “British politicians have consistently tried to portray it [the Common Market and EU] to their fellow-citizens as little more than an economic arrangement: a kind of free-trading area primarily concerned with creating jobs and prosperity, which incidentally can help preserve the peace.”

Both the late David Rockefeller (former chairman of the Internationalists’ Council on Foreign Relations [CFR]) and CFR heavyweight Henry Kissinger (whom President Trump now calls his “friend”) lobbied in the nation’s press for NAFTA. Both candidly supported NAFTA as a steppingstone to something larger.  In a 1993 column that appeared in the July 18 Los Angeles Times, former Secretary of State Henry Kissinger declared:

It [NAFTA] will represent the most creative step toward a new world order taken by any group of countries since the end of the Cold War, and the first step toward an even larger vision of a free-trade zone for the entire Western Hemisphere…. [NAFTA] is not a conventional trade agreement, but the architecture of a new international system.

A few months later, David Rockefeller championed the agreement in the Wall Street Journal: “Everything is in place — after 500 years — to build a true ‘new world’ in the Western Hemisphere,” Rockefeller enthused, adding “I don’t think that ‘criminal’ would be too strong a word to describe … rejecting NAFTA.”   (See our earlier post:  “Renegotiate NAFTA? — No Way! Get US out!”)

“Free Trade” Deception
As with NAFTA, the new agreement establishes a regional bureaucracy to “manage” trade in minute detail. The total number of pages for the treaty, its annexes, and side letters amounts to more than 1,800 pages.

At first, the proposal might seem more honest without “free trade” in the name — less doublespeak. Not so. Article 1.1 of the agreement, titled “Establishment of a Free Trade Area” states:

The Parties, consistent with Article XXIV of the GATT 1994 and Article V of the GATS, hereby establish a free trade area.

And the Office of the U.S. Trade Representative website (ustr.gov) lists the USMCA as a Free Trade Agreement.

And so, the agreement still postures as something that “free trade conservatives” would support.  But there is little “free” in a regional bureaucracy that would manage trade.  And, as with the old NAFTA, the USMCA is an unconstitutional alienation of U.S. sovereignty.  Its Free Trade Commission, for example, can modify the agreement without the approval of Congress.

Internationalist Support for USMCA
Just as Henry Kissinger and David Rockefeller both championed NAFTA, so Richard N. Haass, the current President of the Council on Foreign Relations, endorses the proposed USMCA.  In an October 2 tweet, Haass stated:

USMCA is NAFTA plus TPP plus a few tweaks.  Whatever…if @real Donald Trump and the Congress are now prepared to embrace a pro-trade agenda, it is all to the good.  Ideally, US participation in TPP by another name would be next; failing that, a US-Japan FTA would be second best. 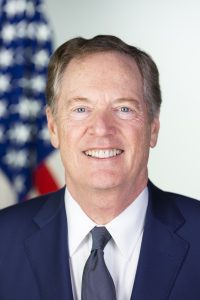 And what else would we expect from an agreement negotiated by Robert Lighthizer? The U.S. Trade Representative (left) is a member of the Council on Foreign Relations, which has long championed Internationalist-run world government.  When tapped by Trump, Lighthizer was a partner at a CFR corporate-member law firm.

As just one example of the Internationalist ties, Article 23.2 states: “The Parties affirm their obligations as members of the ILO, including those stated in the ILO Declaration on Rights at Work and the ILO Declaration on Social Justice for a Fair Globalization (2008).”  (See here for full text of the agreement.)

Trump supporters should ask themselves why Trump is supporting this subversion. Is he really being taken in by his advisors or has he been on board with the Insider agenda all along?

Before the USMCA can take effect, Congress must pass an implementing bill, which could be addressed in the Lame Duck session after the November midterm elections.  If Congress approves the USMCA, not only will the U.S. move another step toward totalitarian world government, but the approval will also neutralize much of the needed future opposition from conservatives and conservative lawmakers, as it will be regarded as the product of an “outsider,” conservative president.

Recommended action:  1) Urge your representative and senators to oppose implementation of the USMCA; 2) Alert others to this deceptive attack on our independence as a nation by sharing this post widely.