Six Lessons We Must Learn from The Federalist Papers 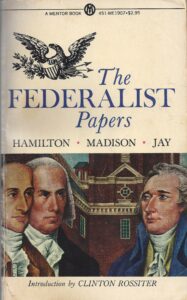 Some liberals are telling us to look back on the Founding Fathers as white, rich entitled snobs who founded this country to support oppression of women and slaves. There could be nothing further from the truth. They were men who understood in a way that few men ever have the proper role and form of government. In The Federalist Papers the three authors (Alexander Hamilton, James Madison, and John Jay) set forth the problems America was facing and the role the Constitution would play in resolving them. In our day there are many lessons that still ring true. The Constitution is still our guiding document, and we would do well to understand the intentions of its writers. There are six lessons from The Federalist Papers that I believe have significance (among many) for us today.

Lesson 1 – Beware of those that claim to be serving “the little people, the common man.”

In Federalist #1, Hamilton tells us “[A] dangerous ambition more often lurks behind the specious mask of zeal for the rights of the people than under the forbidden appearance of zeal for the firmness and efficiency of government. History will teach us that the former has been found a much more certain road to the introduction of despotism than the latter, and that of those men who have overturned the liberties of republics, the greatest number have begun their career by paying an obsequious court to the people; commencing demagogues and ending tyrants.” This has been seen time and again in the characterization of Communist leaders as agrarian reformers. But more importantly it allows us to see to the core of so many civil rights movements. How? By asking one question: what is the end goal? If the end goal is socialism or overt communism — “for the rights of the people” — take note! No movement should be trusted without asking ourselves: is there “a dangerous ambition” here?

In Federalist #8, Hamilton tells us “Safety from external danger is the most powerful director of national conduct. Even the ardent love of liberty will, after a time, give way to its dictates. The violent destruction of life and property incident to war, the continual effort and alarm attendant on a state of continual danger, will compel nations the most attached to liberty to resort for repose and security to institutions which have a tendency to destroy their civil and political rights. To be more safe, they at length become willing to run the risk of being less free.” This lesson has been thoroughly covered in the book Masters of Deception but to sum up the main points beware of any problem for which it is claimed that only government action (either our own or by international entanglements) can solve. The War on Terror, the War on Industry (the eco movement), the War on the Unborn, the War on the Rich, the War on . . . fill in the blank with your favorite movement. The main lesson is beware of the action the government “must” take to solve a specific problem. Beware of the solution being offered to protect against outside threats.

Lesson 3 – Beware of those who want to be judge, jury, and executioner.

In Federalist #10, Hamilton makes the point that “No man is allowed to be a judge in his own cause, because his interest would certainly bias his judgment, and, not improbably, corrupt his integrity. With equal, nay with greater reason, a body of men are unfit to be both judges and parties at the same time.” The same men who are raising the cry of various conflicts that must be resolved by government action are the same men who gain power by that action. They want to be both judge and jury — Hamilton warned us that this cannot be done in fairness.

Lesson 4 – Beware of the Constitutional Convention.

What was the character of the members and what were the circumstances of the Convention? In The Federalist #2, John Jay informs us. “This convention [was] composed of men who possessed the confidence of the people, and many of whom had become highly distinguished by their patriotism, virtue and wisdom, in times which tried the minds and hearts of men, undertook the arduous task. In the mild season of peace, with minds unoccupied by other subjects, they passed many months in cool, uninterrupted, and daily consultation; and finally, without having been awed by power, or influenced by any passions except love for their country, they presented and recommended to the people the plan produced by their joint and very unanimous councils.” Those who think those descriptors fit the individuals pushing for a Constitutional Convention (especially those in power behind the throne) — please raise your hands. If not – why do you think they can amend a document created by men such as we have described? A document — by the way — which was created to protect the people from the injustices of despots. To have a Convention in our current circumstances would be like having the prisoners dictate their guards’ schedules and locations. Those seeking a Convention wish to escape from the Constitution — we do not want to let them rewrite it. They have deceived individuals into thinking that the Con-Con could be limited in scope — but in reality, we would be granting the authority to rewrite the Constitution in any way they please — we should trust those that will be writing a lot less than our Founding Fathers.

Lesson 5 – Beware of the idea that government simply wishes to help.

Some may see socialism as the great solution – if we yield our money and power to the government won’t they do what is best for society? We have too many problems in our society for us to solve, can’t we let the government solve them? This is dangerous in and of itself, but the reality is even more scary. We would not be placing our power in the government of the United States, we would be giving that power to those who sit in the shadows and are the true power behind the throne. Can we trust them? In a word, NO! In Federalist #47, Hamilton informs us that “No political truth is certainly of greater intrinsic value, or is stamped with the authority of more enlightened patrons of liberty, than that . . .The accumulation of all powers, legislative, executive, and judiciary, in the same hands, whether of one, a few, or many, and whether hereditary, self-appointed, or elective, may justly be pronounced the very definition of tyranny.” Did the leaders of Russia, China, North Korea, Germany (under Hitler), etc. serve the best interests of their people? The government is not the answer — instead of looking for how the government can solve the problems ask yourself — how can you solve your problems? George Washington has often been quoted as saying “Government is not reason, it is not eloquence — it is force! Like fire it is a dangerous servant and a fearful master; never for a moment should it be left to irresponsible action.” Don’t let the fire loose in a city and then wonder why everything burned down.

As we consider the push recently to defund the police (starting with Minneapolis in June 2020 – See Time, February 23, 2021 “How Are Activists Managing Dissension Within the ‘Defund the Police’ Movement?”), we can see the importance of something said by Alexander Hamilton. In Federalist #23, he said, “This is one of those truths which, to a correct and unprejudiced mind, carries its own evidence along with it; and may be obscured, but cannot be made plainer by argument or reasoning. It rests upon axioms as simple as they are universal; the MEANS ought to be proportioned to the END; the persons, from whose agency the attainment of any END is expected, ought to possess the MEANS by which it is to be attained.” Individuals are absurdly unrealistic if they expect “the persons,” our police force, to prevent crime and ensure our safety but they must do it with these characteristics — no guns, little money, no protection from anyone who decides to sue them, and they need to be black women — all of them. If we want our local police forces to be able to solve our problems let’s give them the “MEANS” to do so — anything else is a waste.

As we conclude, we see some things clearly. A series of articles written over 200 years ago has important lessons for us today. Power does not change, the same Constitution that protected the rights of the Americans in the late 1700s can protect our rights today. To those who wish to understand the thinking behind the Constitution and how it can apply to our lives today — I urge you to read The Federalist Papers.