Let’s Learn the Lessons of History! 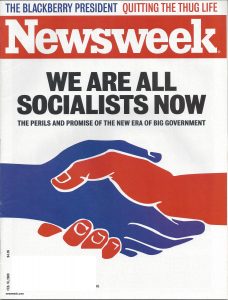 “Tonight, we renew our resolve that America will never be a socialist country.” — President Donald Trump, Second State of the Union Address, 2-5-19

Unfortunately, uninformed resolve won’t stop the socialist revolution.  The Newsweek cover story, “We Are All Socialists Now,” for its February 16, 2009 issue, published during the Obama administration, is once again timely and illuminating.  During the subsequent 10 years the socialist revolution has continued to advance through a pattern of subversive deception.

“We Are All Socialists Now” is supported by a second article, “Big Government Is Back — Big Time.”  We will comment on both.

In their cover story, the two Newsweek authors properly excoriate posturing “conservatives” for attaching the unpopular “Socialist” tag to Obama administration policies while ignoring the fact that Republican administrations had also supported socialism.

But these GOP “conservatives” are not hypocrites, as Newsweek seems to imply, but “wolves in sheep’s clothing.” For the Establishment weekly also took pains to portray the subversive socialist trend in big-government as a natural modern development (thus covering up the hidden orchestration) and something that should be embraced.

Not surprisingly, both authors of the cover story showed up on the 2008 and 2009 membership lists for the Establishment’s Council on Foreign Relations (CFR).

We list here a few of the article’s claims, followed by our (FFS) analysis:

Newsweek:  “Whether we want to admit it or not — and many, especially Congressman Pence and Hannity, do not — the America of 2009 is moving toward a modern European state.”

FFS analysis: Newsweek deceptively ignores the fact that America is being pushed into socialism.  Neither natural forces nor an informed public will are driving that revolution.

Newsweek continues:  “We remain a center-right nation in many ways — particularly culturally, and our instinct, once the [2008 financial] crisis passes, will be to try to revert to a more free-market style of capitalism — but it was, again, under a conservative GOP administration that we enacted the largest expansion of the welfare state in 30 years:  prescription drugs for the elderly.”

FFS analysis: Here Newsweek again covers up the orchestration behind our nation’s demise, by suggesting that our culture and “our instinct” are what drives Washington rather than merely serving as an obstacle for the Establishment to overcome.  But even Newsweek admits that “our instinct” didn’t prevent “a conservative GOP administration” from enacting “the largest expansion of the welfare state in 30 years.” Nor does the Newsweek story give any attention to the orchestrated attack on our culture through government-controlled education or the push for massive unassimilated immigration, against the public will, from cultures that are far from center-right.

Newsweek: “If we fail to acknowledge the reality of the growing role of government in the economy, insisting instead on fighting 21st-century wars with 20th-century terms and tactics, then we are doomed to a fractious and unedifying debate.  The sooner we understand where we truly stand, the sooner we can think more clearly about how to use government in today’s world.”

FFS analysis:  Here Newsweek tries once more to reinforce the pure illusion that some kind of “open debate” is actually deciding the direction of government.  While the partisan winners and losers may not be “fixed,” the socialist direction of government is.  In support of that fix, the Establishment-controlled media obscures political betrayal by entertaining the public with the equivalent of a professional wrestling match.  And, of course, Newsweek never even suggests that there are any constitutional restraints on what government can or should do.

Newsweek:  “Whether we like it or not … the [government spending] numbers clearly suggest that we are headed in a more European direction…. But the simple fact of the matter is that the political conversation, which shifts from time to time, has shifted anew, and for the foreseeable future Americans will be more engaged with questions about how to manage a mixed economy than about whether we should have one.” [Emphasis added.]

FFS analysis:  Here again, Newsweek seeks to reinforce the illusion that political conversation and a public engaged with questions are what is driving our nation’s subversion.

Newsweek: “During the roughly three decades since Reagan made big government the enemy and “liberal” an epithet, government did not shrink.  It grew.”

Newsweek: “Now comes the reckoning. The answer may indeed be more government.  In the short run, since neither consumers nor business is likely to do it, the government will have to stimulate the economy.  And in the long run, an aging population and global warming and higher energy costs will demand more government taxing and spending.” [Emphasis added.]

FFS analysis:  Here Newsweek perpetuates the power-grabbing Establishment mantra that government must run a modern economy.  But just perhaps, when consumers decide not to spend, they may have a good reason.

Newsweek: “Obama talks of the need for smart government. To get the balance between America and France right, the new president will need all the smarts he can muster.”

FFS analysis:  Here Newsweek further supports the same power-grabbing deception that has also been used to justify the Federal Reserve:  namely, that only the “best and the brightest” intellectuals can be trusted to prevent a market economy from imploding.

Right off the bat, we would ask:  “When was big government away?”  But let’s look at some of what the article is promoting.

Newsweek:  “When Obama called Wall Street ‘shameful’ and greedy, he was articulating what the French have always thought, and endorsing Sarkozy’s recent dismissal of the ‘crazy’ idea that markets are always right.”

FFS analysis:  While markets may not always be right, they have the right to be wrong.  This applies to what consumers spend their money on as well.  The clever sophistry that government force should supervise such decisions is merely a pretext for a government power grab.

Newsweek:  “At its most basic level, the nearly $1 trillion U.S. stimulus package now being dissected on Capitol Hill is a fight over how great a role the federal government will play in what had been, for decades, private economic life.  And while it’s impossible to know just what the day after the crisis will look like, the broad contours of the new economic world are becoming visible.”

FFS analysis:  The “new economic world” sounds ominously like “a new economic order.”  “Building a new economic order” is a phrase used by Internationalists (e.g., Trilateralists and CFR types) to refer to the process of consolidating global control.   And Newsweek is just helping to lay an intellectual smokescreen for a new step in government control of “private economic life.”

Newsweek:  “One of the more lasting effects will be a steady drift toward what could be called a European model of governance, regulation and paternalism…. More specifically, in the absence of a robust private sector (or at least public confidence in business) the U.S. government will be forced to fill the gap, firmly directing businesses in all sorts of ways — regulating some industries (particularly banking and the automotive sector) with big-brother vigilance, favoring others like clean energy with grants and loans, and turning still others — health care, pensions — into virtual wards of the state.”

FFS analysis:  Who forces government to fill an ostensible gap?  Not the public.  Instead, opportunistic socialists seek to fill any gap they can claim exists.  And constitutional protections against government overreach be damned.

Newsweek:  “So aside from expanding the social safety net, the government will have to take a greater role in guiding business toward ends the state deems healthy for the overall economy.” [Emphasis added.]

FFS analysis: This outrageous endorsement of more government power is a blatant rejection of the limited government authorized by our Constitution.  America’s founders understood from the historical record that unrestrained government led to tyranny and that “the state” needed supervision, not the other way around.  Newsweek doesn’t identify whom it sees as “the state.” But it’s obvious that its state consists of Establishment Insiders who seek to build an unaccountable police state.

Newsweek:  “But sentiment is moving toward some form of universal health care and will only grow if unemployment remains high.”

Newsweek:  “Another way government can take a larger role, particularly in easing the burden created by low stock-market returns, is by introducing programs that forgive some or all college-tuition debt in exchange for public service, something Obama promised to do on the campaign trail.

FFS analysis:  Newsweek’s endorsement of “public service” seems reminiscent of President Clinton’s inauguration of “national service” via the National and Community Service Trust Act.  That Act created the taxpayer-financed Corporation for National and Community Service (CNCS), which would include the AmeriCorps and VISTA. The bureaucracy that must be set up to administer these programs is not only highly expensive, but the “service” is generally of marginal value to the taxpayer.  And most ominously, the idea of an expanded volunteer army serving the State harkens comparisons to Mussolini’s programs for service to the Fascist State. One should also consider why college education has become so expensive now that the federal government is placing increasing demands on colleges to create bureaucracy to enforce political correctness.

Newsweek:  “This crisis-driven debate on the proper role of government is not confined to America. At the recent World Economic Forum….”

FFS analysis:  The notion that there is a high-level debate on the proper role of government is absurd.  The only debate is over how government can best gain more power through deception and manufactured crises.

Newsweek:  “Bailouts, protectionism, talk of bank nationalization and a nearly $1 trillion stimulus package are not a socialist conspiracy, as some right-wing U.S. pundits and talk-show hosts insist.”

FFS analysis:  We think Newsweek doth protest too much, while seeking to demonize even phony opposition as “right-wing”!

Newsweek:  “Nonetheless, it is clear that a ‘centrist rebalancing’ is taking place even in America, says Sunder Katwala, head of Britain’s center-left Fabian Society, and that a prolonged period of slow growth will force the United States to become something more like Europe.”

FFS analysis:  Center-left? Britain’s Fabian Society is out-and-out socialist.  Indeed, one of its leaders, published The Story of Fabian Socialism.  From its inception, the Fabian Society embraced a strategy of deception, patient gradualism, and permeation of other organizations. The Fabians would permeate and control the British Labour Party and the Socialist International.  They would also establish roots in this country.