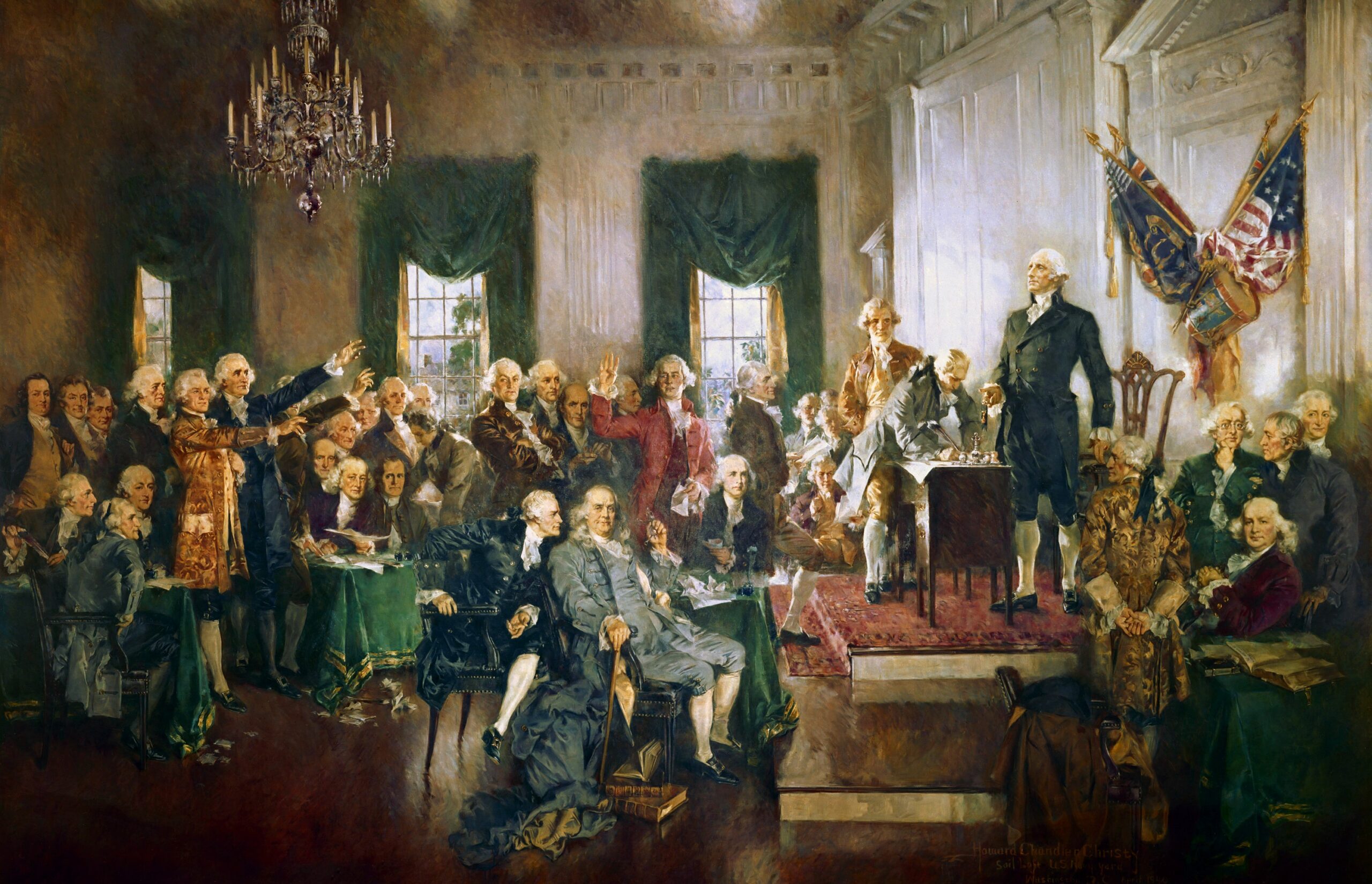 Pity the poor proponents of an Article V con-con. How could they ever have happy holidays?

For they are self-impaled on the horns of a brutal dilemma. They must argue either:

Very oddly, though, despite such a daunting dilemma you never see a con-con proponent backing off from his or her insistence that we must amend our Constitution — and, that it needs to be done through a (colossally dangerous) Article V constitutional convention! Only this magic (albeit never-before-used) formula will save us from our “out of control” government, they keep saying.

Take, for example, the odd insistence of Mr. Nick Dranias.

Mr. Dranias, who leads Compact for America, has apparently enough sense to realize that though proving the second point (flaws in the Constitution) would be a formidable challenge, proving the first is clearly impossible. He has thus, almost alone, taken on the challenge of proving that our Constitution is to blame for our bloated federal government.

Unfortunately, Dranias’s case rests on a misconstrual of the Constitution and of the history of our federal government’s borrowing and spending.

According to Dranias (on his Compact for America website), “The Constitution as it exists fully authorizes unlimited spending, taxing and borrowing in support of the enumerated powers.”

He adds quickly, “Of course, the federal government is doing much much more than what the Founders thought the enumerated powers authorized. But that is politically inevitable when you give elected officials an unlimited credit card with which they can promise anything to get elected at no immediate cost to current voters!”

Dranias is very fond of using this phrase “unlimited credit card” to describe the Constitution’s lack of explicit limitation on federal-government borrowing. He means, apparently, that they can borrow as much as they want, at any time, with no penalties felt at all soon.

The metaphor is clever but misleading. A look at the actual historical data on U.S. federal government debt makes clear how misleading it is.

How did we REALLY get our mountain of national debt?

If the Constitution is an “unlimited credit card” that allows Congressmen to buy their way to re-election, how does Mr. Dranias explain the fact that our national debt was relatively under control until the Vietnam War was winding down, and then suddenly exploded in the early 1970s?

Even though there was concern over our growing national debt before the 1970s, compared to today’s enormous debt, the debt was miniscule. Although it grew significantly during World War II, a time-chart of the debt will show that it grew practically none between 1945 and 1970. Not until the early 70s did our debt begin its exponential climb to its current astronomical heights.

Why was that? Were U.S. Congressmen generally so obtuse before 1971 or so, that they never noticed the Constitution gives them an “unlimited credit card” with which to buy votes? Or were they perhaps all angelic statesmen, before that time, who kept to the Constitution’s spending-bounds out of the goodness of their hearts?

Or, was there perhaps something that happened in the early 70s that opened the spigot for unlimited government borrowing? There was indeed: On August 15, 1971, President Richard Nixon made a catastrophic structural change to our monetary and banking system. This change allowed for virtually unlimited creation of (new) money by the Federal Reserve System, to lend to the government (at below-market-level interest rates).

For it was on that date that Nixon “shut the gold window” to foreigners,

refusing to let foreign central banks redeem their dollars for gold, facilitating the devaluation of the U.S dollar which had been fixed relative to gold for almost thirty years. While not strictly a default on a US debt obligation, by closing the gold window the US government abrogated a financial commitment it had made to the rest of the world at the Bretton Woods Conference in 1944 that set up the post-war monetary system. At Bretton Woods, the United States had promised to redeem any and all U.S. dollars held by foreigners — later limited to just foreign central banks — for $35 dollars an ounce. This promise explains why the Bretton Woods monetary system was called a “gold exchange standard” and why many believed the US dollar to be “as good as gold.” (http://triplecrisis.com/a-first-default-closing-the-gold-window/)

Redeemability is what a “bank note” is all about: It is simply a bank’s I.O.U. for the bearer’s “demand deposit” of true, commodity money (namely gold, in this case). It is understood to be strictly redeemable in that money, on demand, to whomever is bearing the note.

Perusal of a 1934 Federal Reserve 10-dollar note, for example, shows that the note declares it is “legal tender for all debts, public and private, and is redeemable in lawful money [initially, actual dollars, of gold or silver, or redeemable U.S. Treasury Gold or Silver Certificates] at the United States Treasury, or at any Federal Reserve Bank.” It states further that “The United States of America will pay to the [note’s] bearer on demand Ten Dollars.” (interpolations in square brackets ours.)

President Franklin Roosevelt had already “shut the gold window” to U.S. citizens back in 1933, allowing the banks to forego honoring their commitment to redeem the notes in gold (or Gold Certificates). But at that time they were still exchangeable for U.S. Treasury-issued Silver Certificates; and those were redeemable, in silver coins.

Then in 1968, President Johnson and Congress had nullified the pledge to redeem the Silver Certificates — again, for U.S. citizens only. But not until Nixon “shut the gold window” to foreigners also in 1971, were U.S. “dollars” — including, paper Federal Reserve “Notes” — completely unshackled from redeemability in precious metal.

Did that major change indeed open the spigot for creation of Federal Reserve paper “dollars”? Yes, of course: If banks no longer have to redeem their “notes” at all, yet those notes are “legal tender,” they will really go to town with their “money”-printing presses! They’ll be more than happy and ready to loan these fraudulent paper “notes” into circulation.

One may readily confirm that that is what has happened, by glancing at a time-chart of the M3 U.S. “money” supply: Clearly it was right around 1971 that our supply of (paper) “money” began to increase by leaps and bounds. Before then, the “money” supply was somewhat limited by the gold supply in the Federal Reserve’s vaults.

Did the Constitution permit this debt disaster?

So, is Mr. Dranias correct, in blaming our national-debt disaster on the Constitution? No — unless the Constitution permits government to declare irredeemable paper money a “legal tender” in payment of debts. For only if they are declared “legal tender” must such fraudulent, irredeemable and therefore essentially worthless notes be accepted as real “dollars,” when the government (or anyone else) offers them in payment of a “dollar”-denominated charge or obligation.

But in fact, not only does the Constitution not permit this; it forbids it. At the time of its ratification, the states had created an inflationary crisis by declaring a burgeoning mountain of irredeemable bank notes “legal tender.” This is why the Constitution forbade states to “make any thing but gold and silver coin a tender in payment of debts” (Art. 1, Sec. 10). That provision brought an end to the inflation.

Thus the Constitution also did not permit the government to take these other actions that were crucial in its drive to substitute paper, irredeemable currency for our sound money:

So it turns out that, thru his misdirecting of the blame, Mr. Dranias is implicitly exonerating our leaders and the Fed, and irresponsibly risking our liberty. For the Constitution is not the problem. Disobedience to the Constitution is!

Tragically, the constitutional requirement to limit government to its enumerated powers has virtually disappeared from media-led political discussion, in favor of a dangerous “how much can we afford?” debate. Without an informed electorate forcing its representatives to adhere to the Constitution, the government’s substitution of irredeemable Federal Reserve bank notes for our once-sound monetary system has supported a massive explosion in the national debt. Our need is not to alter, but to return to, that wisely crafted form of government that our Founders outlined so clearly.