Congress, Do Your Job! 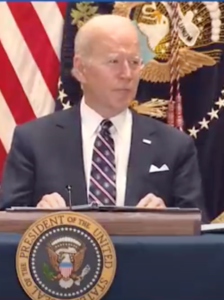 In the wake of the tragic deaths of two New York City police officers, President Biden has made yet another push in the direction of disarmament of the American people. On February 3, 2022, he called for Congress to “do its job” and approve budget increases to the tune of hundreds of millions of dollars to end the epidemic of “gun violence” (for the video of the speech, click here).

He has also asked for America’s legislative branch to pass legislation that purportedly regulates “ghost guns” that are not purchased in a store but are constructed at home, as well as tracking guns across state boundaries. “If you commit a crime with a ghost gun, not only are state and local prosecutors going to come after you, but expect federal charges and federal prosecution as well,” said Biden.

While some of these matters may fall under Congress’ “duties,” the President is atrociously wrong in claiming that these measures will help America.  The federal government is the problem not the solution. It has been tearing down the twin pillars of a free society — traditional morality and religion — and helping to create a society that produces criminals.

Yes, the president’s proposals do violate our rights as protected by the Second Amendment. His claim that “assault weapons” should not be bought and sold by law-abiding citizens does usurp those rights, as many handguns used for self-defense fall into this “forbidden” category. His proposed budget increases heap increasing tax burdens on the middle class. We pray that Americans will not be swayed by the emotion of the tragedy to support the President’s outrageous proposals.

Yes, Congress should do its job. It must defend the Constitution and reject the socialist “reforms” proposed by President Biden.