The Betrayal Known as ‘Immigration Reform’ 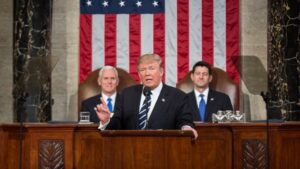 “If the president chooses to embrace an overhaul that lets [illegal] immigrants live and work in the country, it would represent a remarkable betrayal of many of his core supporters that comes just days after he ordered a crackdown aimed at deporting all undocumented [i.e. illegal] immigrants….

“It is unclear why Mr. Trump chose to suddenly contemplate changing direction. Nor is it clear whether the shift will be a lasting one that results in real efforts to build a coalition in Congress behind a comprehensive immigration overhaul that provides what conservatives have long derided as amnesty.”
— “Trump Seesaws on Legal Status for Undocumented Immigrants,”—  New York Times, March 1, 2017

The American people have long wanted our federal immigration laws enforced. But somehow that seems too difficult for our government to handle.

Is that because enforcing immigration law is really difficult? Is it like rocket science? Have we still not figured out how to do it?

No, that is not the problem. We know very well how to do it. For example, over 20 years ago the official, bipartisan U.S. Commission on Immigration Reform (widely referred to as the “Jordan Commission”, after its chairwoman, the former Rep. Barbara Jordan) produced some very sound recommendations on how to control illegal immigration. Since then, technology to implement suggestions such as workplace verification of employability has only improved.

The fact that we’ve not really been following these suggestions or enforcing our immigration law shows therefore a lack of political will. Or, to be more accurate, an overabundance of political betrayal.

A crucial weapon in this betrayal has been the phrase “immigration reform.” It is a time-honored tactic of revolutionaries — including those in Congress and in the media — to manipulate language so as to confuse relevant and important distinctions. For example, “undocumented worker” confuses the surface issue of not having certain valid papers, with the more basic and important issue of being in the country illegally.

The term “immigration reform” has been used, quite cleverly, to confuse very different problems: illegal immigration, and excessive legal immigration. The latter has increasingly been a problem ever since the 1965 amendments to our immigration law.

Most notably, the “chain migration” problem got a foothold through those amendments; and it has grown worse through later changes to the law. It is that problem, in fact, to which President Trump was referring, in his Feb. 28 speech to Congress, when he said that our immigration system needs to become (or more correctly, to get back to being) a “merit-based” system, that screens potential immigrants for merit.

Now, what both sides in the debate mean basically by “immigration reform” is a change to the law regarding who is allowed to reside here: The conservatives want to strengthen this law, in such problem areas as chain migration and visa lotteries; in contrast, the radical left want to see it emasculated, by adding an “amnesty” for illegals currently here.

This being the case, it is only this problem of excessive legal immigration that can, with logic and reason, be a target of “immigration reform.” Whereas the problem of illegal immigration is, and always has been, not a question of better law, but rather, essentially the need to enforce the law.

OK, but why would it be a clever move for the open borders revolutionaries to confuse these two issues together, under the one term “immigration reform”? That is because they want to convince us of what they have been chanting for years and years, that “immigration reform” cannot be truly “comprehensive”, cannot really fix “our immigration problem” (notice the singular), unless it “deals also” with the large number of illegal immigrants we have — by which, of course, they mean what conservatives call an “amnesty.”

Of course, that makes no intelligible sense: The way you deal with a problem of people breaking the law with impunity, is to do away with the impunity! To blame the law for the fact that it is not being enforced, is exactly parallel to, and as illogical as, blaming the Constitution for the fact that Congress is too morally challenged to observe it.

The pertinent question is therefore, “Do you really WANT immigration law, or not?” For to move to put something in the law that fundamentally neuters the law, such as an “amnesty,” is to imply you don’t really want the law. And that is not “reform”; on the contrary, it is demolition.

Buying Into the Deception

OK, but is this catastrophic confusion of enforcement-issue and law-issue something relevant to today’s news? Unfortunately, very much so.

Worse yet, the law-change train he jumped onto is that misdirected old train known as “immigration reform” — with all its baggage of betrayal. Earlier in the day, he spelled out more clearly what he had in mind:

Like his predecessors on the day of a State of the Union address, Mr. Trump hosted the journalists for what was supposed to be an unrecorded lunch to give them a sense of what he would tell Congress. But the conversation took a surprising turn when some of the anchors asked about his efforts to deport many of the estimated 11 million immigrants in the country illegally. Without being prompted, Mr. Trump then raised the idea of legislation, noting that there had not been any comprehensive law passed by Congress on the subject since Ronald Reagan’s amnesty program in the 1980s.

He told the anchors it was time for a bill that would grant legal status to many of those in the country illegally as long as both sides compromised, similar to the legislation sought but never passed by George W. Bush and Barack Obama. Mr. Trump said he recognized that it would cause him political problems with his conservative base voters, according to people in the room, but added that he thought he could keep them happy since they had stuck with him throughout last year’s Republican primaries.— “Ever a Showman, Donald Trump Keeps Washington Guessing,” New York Times, February 28, 2017

It is an interesting question, for Trump supporters, why he changed trains — and whether he can indeed “keep them happy” despite that shift. In the meantime, the urgent challenge is to keep him from dragging our nation onto that train in his wake.