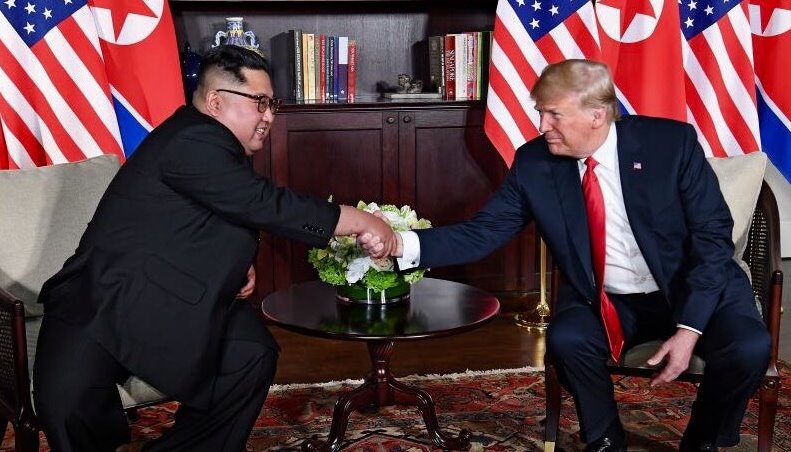 Of Treaties, Betrayals, and Trump

Over the past century, the right accused liberals and Democrats of excusing the crimes of Josef Stalin, Mao Zedong, and Fidel Castro. Often, the criticism was well-founded.…​

All these charges have deafening echoes today. But this time, the credulous appeaser failing our allies is a Republican president. For communist dictators such as Xi Jinping and Kim Jong Un, Trump exudes admiration and amity. To the anti-Western Russian President Vladimir Putin, he offered congratulations for winning a rigged election.

When it comes to Canada’s Justin Trudeau and Germany’s Angela Merkel, by contrast, he seethes with resentment. With Trump, it’s better to be a long-standing American adversary than a faithful ally.

“This is what North Korea has wanted from the beginning, and I cannot believe that our side allowed it,” said Joseph Y. Yun, a former State Department official who has negotiated with the North. “I am quite simply surprised that months of negotiations produced so little.”

— “The Trump-Kim Summit Was Unprecedented, but the Statement Was Vague,” The New York Times, June 12, 2018

Trump and Kim appear to be bosom buddies now —​ after a few hours of tete-a-tete. However, even that astonishing result fails to account for the message Trump sent to the “citizen”-slaves of North Korea:

Trump went so far as to praise Kim in a message directed to the North Korean people, when Greta Van Susteren, who was conducting an interview for Voice of America that “will be heard in North Korea,” asked what he wanted the North Koreans to know.

“Well, I think you have somebody that has a great feeling for them. He wants to do right by them and we got along really well”, he replied. “We had a great chemistry — ​you understand how I feel about chemistry. It’s very important. I mean, I know people where there is no chemistry no matter what you do you just don’t have it. We had it right from the beginning, I talked about that and I think great things are going to happen for North Korea.”

“Great things are going to happen for North Korea.” He sounds like he’s in a political campaign, to elect Kim supreme leader! (But if Kim’s such a swell guy, why have no “great things” happened for them already?)

Why would Trump throw them this sales pitch? What U.S. interest could it possibly serve?

For that matter, why would Trump think it necessary for him to enlighten them? If Kim is truly “somebody that has a great feeling for them” and “wants to do right by them,” how could they fail to perceive that? Moreover, how could they not be in a much better position than Trump, to know whether it is true?

So, what Trump is ostensibly trying to do with his Voice of America message, makes no sense. But consider what his statement does indeed tell the North Koreans — ​albeit “between the lines”: It lets them know, for sure, that the United States Government is either on the friendliest of terms with Kim, or afraid of him, or else really on his side. No other interpretations of Trump’s behavior are plausible.

Is conveying that implicit message an aim that does make sense of Trump’s action here? Yes, but only if he or his administration are trying, ultimately, to shore up Kim’s dictatorship — which is, of course, not a U.S. national-security concern.

Our answer to the first question: It gives such dictators a greater security from the occurrence they fear the most:

A very large part of the total effort of the Kremlin tyrants is spent in building up their bluff of unassailable power —​ as in constantly demonstrating and re-advertising to the world how completely the United States Government is on the friendliest of terms with them, or is afraid of them, or is really on their side. This is because they have only one great fear as to physical or military danger. But it is something they live with all their lives. And that is the fear of a simultaneous uprising of the subjugated peoples.

For if the East Germans should rise with the fervor they showed in 1953, and the Poles and Hungarians with the bravery they proved in 1956, and the Chinese with the suicidal determination so frequently demonstrated by millions of their compatriots ever since 1950, and the Indonesians with the courage of the “Colonels” in Sumatra only two or three years ago, and the Russians themselves with the daring that was exemplified at Vorkuta; if these and all of the other enslaved subjects of the Communist hierarchy should revolt and begin to fight all at the same time, and even if they had in the beginning only sticks and stones for weapons, the lords of the Kremlin could not last three months against such an uprising —​ and they know it! So they arrange to precipitate uprisings, one by one and here and there, in accordance with their own time table, to entice each separate underground opposition out into the open and destroy it.

But a clear-cut shooting war, between the Soviets and the United States, would be an automatic signal for simultaneous revolt. For war on any such scale simply could not be kept from the knowledge of even the most isolated and oppressed people. And hundreds of millions of desperate human slaves all over the world would immediately realize that it was now or never. It would produce that very coordination of resistance which the Kremlin seeks above all else to avoid….

It is … precisely because no earthly power could drag the Soviets into a real war or an honest war with the United States today that they beat their breasts so much and threaten war so loudly and so often.

OK; but how about the second question: Is it even conceivable that Trump or his administration would want to shore up Kim’s dictatorship? At the risk of appearing a bit cagey, we shall say simply that this has been an unfailing achievement of the foreign policy of each U.S. president since FDR. That Trump is continuing in this consistent pattern, should hardly be amazing.

Indeed, there is no lack of examples of such friend-betraying, Communist-dictator-helping behavior on the part of U.S. presidents —​ including Republican ones. For example, we shall quote Robert Welch once more, regarding one such Republican:

There have been few crimes in history more brutal and more extensive than [the “Operation Keelhaul”] forced repatriation of anti-Communists, to which Dwight Eisenhower committed the honor of the United States. Dragging the honor and reputation of our country through such pools of bloody betrayal, and thus convincing anti-Communists of either the stupidity or the pro-Communism of the United States, was of course one of the objectives.…​ You can find excuses and reasons for Eisenhower’s conduct, or for various separate parts of it, by the dozen, if your credulity can stand the burden. But there is one simple, plain, straightforward reason which completely solves the whole problem, without leaving a single loophole. And we do not need to spell it out any more.