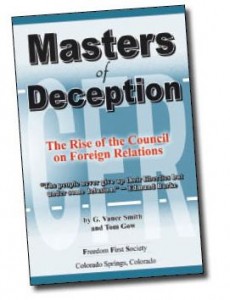 Many Americans who previously regarded the American dream as their birthright are shocked to realize that the dream may be dying.

Most responsible Americans, however, are frustrated because they have no clear understanding of how America got into trouble, and therefore they have no realistic idea of what to do about it.

Despite the promises of political leader after political leader, from both major parties, to put America back on track, our nation’s problems — economic, social, and political — have steadily become worse.

Freedom First Society’s position is that Americans have been deceived into accepting a false view of what is driving this new American revolution.   And that without a clear understanding by many more opinion molders of the revolution’s goals, it’s deceptions, and how it is organized, we will steadily lose our “birthright.”

The evidence, the organization, the plan, the deceptions, and a solution are all summarized in Freedom First Society’s Masters of Deception: The Rise of the Council on Foreign Relations, published in 2012.

In 2014, Don Fotheringham authored The President Makers: How Billionaires Control U.S. and Foreign Policy, which breaks new ground in research, while covering the same topics from a different perspective.

Wide distribution of these tools, particularly through personal contacts, is at the heart of our strategy to Expose the Conspiracy!

This emphasis on exposure is also an essential feature of several supporting Freedom First Society campaigns:

For each of the above revolutionary confrontations, Freedom First Society provides essential leadership missing from the common public reaction — a reaction that regrettably focuses purely on defense.   Instead, we seek to expose the revolutionary background and hidden agenda behind the assaults.

Although there is a lot of resistance to the term, “Conspiracy,” we continue to use it, because the battle over the term coincides with the necessary exposure.

However, it is essential that we clarify what we mean by “Conspiracy” and equally what we do not mean.

A variety of evidence confirms the existence of a powerful Conspiracy, similar to many conspiracies throughout history. The modern version differs primarily in that it is much better organized and planned, based on long revolutionary experience.

Our view of this group fits the dictionary definition of conspiracy — a secret plan among more than one to carry out an arguably evil end.

Any effective conspiracy must keep its designs secret or at least not allow the public at large to view them undisguised. This necessarily dictates that the innermost circle of the conspiracy be kept small.   Outside this inner circle, many others may serve its designs, knowingly or unknowingly, for a variety of motivations.

The most powerful means the present Master Conspiracy has for enlisting others in its cause is its ability to provide ladders (career, social, and financial) to the ambitious.

It’s Not a Theory

Those who wish to keep the public unaware of the massive evidence for a conspiracy have adopted a number of tactics. A primary tactic is to pretend as though no hard evidence exists — dismissing alarmists as simply unschooled minds embracing a simplistic explanation and speculative “theory” for complex events.

Another tactic seeks to make the conspiracy claim sound ridiculous through exaggeration and distortion or by highlighting the wild charges of “convenient” strawmen. Contrary to such spins, the Conspiracy is not a large, pervasive, disciplined army.

Another tactic used to hide the evidence is to enforce an unwritten code for “respectable” public debate. Those Establishment forces that dominate the major media have been very successful in intimidating any who might consider speaking out of school. According to the code, it is “politically correct” to talk about ideological differences and sincere differences of opinion, but not to expose organized deception or hidden agendas.

In short, it is okay to discuss fires, building codes, and fire prevention, but those who would expose arson are to be, in the words of Nikita Khrushchev “subjected to the torments of hell.” Today’s politicians are well aware of how the late Senator Joseph McCarthy has been continuously vilified, and they get the message — don’t go there, unless you wish to commit political suicide.

One Who Spoke Out

We do not have the space here to build a solid case for our claims of Conspiracy. However, to give them some credibility, we point to remarks by the late Senator William Jenner from Indiana. What gave Jenner particular authority to warn of organized subversion was his position in the early fifties as chairman of the Senate Internal Security Subcommittee.